Skip to content
We’re ready for an adults garden again – where do we begin? 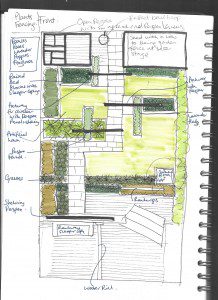 This client has extensively renovated the interior of their home and were now turning their attention to their garden. The client’s children are growing up so this garden design will allow the teenagers some privacy but also space for the adults. The garden is split over two levels, but unusually the bottom half was well proportioned with a large deep area suitable for entertaining.

Stairs went up to the right towards the back. The client wishes to utilise the back end of the garden for the teenage children and liberate the space which is currently tied up with sheds and overgrown shrubs making it unusable.

The bottom area of the garden was to be decked, A water rill running through the decking was to be incorporated. A railway sleeper sofa was to be built and positioned to the left, and a large “shelving unit” was to be cited behind this to allow for interest and an ever-changing backdrop.

The client wishes to incorporate some existing architectural salvage railings that they had. These were to be incorporated within the box hedge. A silver birch tree placed in a fibreglass container was also to add height to this area.

The pathway doglegged to the left and then to the right a mixed block planting. A series of raised beds and archways break the space as you travel down towards the back of the garden.

Spanning the width of the garden at the back to the right is a shed with a view of been a garden office at a later stage. To the left a pergola from which you could hang series of garden furniture, curtains, lighting, or any other objects they so desire. A basketball hoop could also be positioned centrally in this area.

Materials used within the garden would include artificial lawn, perspex, timber and paving. The client really liked old country gardens so planting will be soft and blausey with peonies, roses, lavender, poppies and foxgloves.