These clients were looking for a garden designer in East London. They built their dream home from scratch a few years ago. The dynamic and distinctly modern building is arranged over several levels, with lots of interesting spaces and areas to hang out. However, the current garden is uninspiring and needs to echo the contemporary style of the building and interior space, while remaining practical and accommodating all the family’s needs. Set over three levels, it is a challenging site that is currently overlooked from the house behind and is cumbersome to traverse due to the steep and unwieldy steps to the sunken area at the corner of the house. 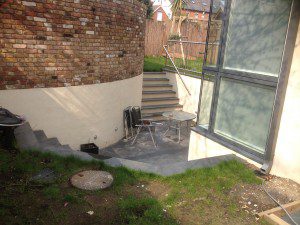 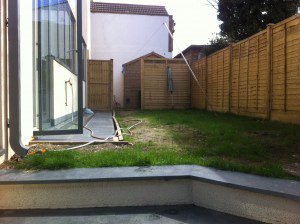 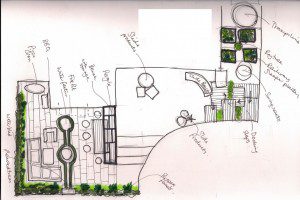 This modern garden design aims to strip back the space and give it greater cohesiveness. The area directly outside the kitchen is to be reassigned as a children’s play area and vegetables garden. It will comprise a trampoline, four raised vegetable beds constructed from railway sleepers, a sculptural swinging seat on a frame and the existing greenhouse which will be relocated from its current position in the other section of the garden. Flooring in this area will be machine cut and sandblasted Indian sandstone paving. The current stairs will be reshaped with hardwood decking to create much wider and more gentle steps, with large fibreglass planters placed in parallel and at right angles to the steps to create a safety barrier. 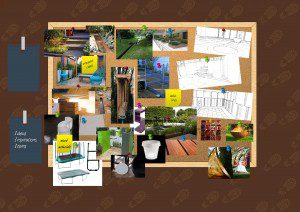 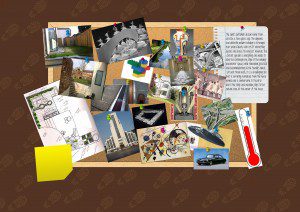 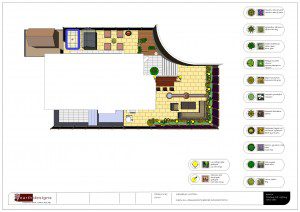 The sunken area the bottom of the steps will feature curved illuminated furniture and an illuminated planter to create an eye-catching place to stop and sit a while before heading to the main section of the garden at the top of the existing steps.

The main area becomes the focal point of the garden, dedicated to entertaining and relaxation. It will be bordered by pleached magnolia trees backed by aubergine Perspex panels attached to the fence to give the garden greater privacy from the surrounding houses. The middle of this area will include a water feature comprising a water blade mounted on a small rendered white wall which will pour into a copper mosaic rill. This rill will stretch across the space, under a firepit in the centre, to terminate in a circular sunken pool at the other end.

A chunky timber pergola constructed along the retaining wall to the sunken area will feature a long bench, table and 5 chairs for large scale entertaining. Opposite this, on the other side of the water feature, is a lounging area with rattan sofas and chairs laid out for relaxation. In the corner next to the house a BBQ and pizza oven offer culinary possibilities. The floor in this space will be laid with machine cut sandstone to match the paving in the area outside the kitchen.