Avoid garden disaster, get a designer

If only we had gone to a designer at the start, we wouldn’t have had our garden disaster.

That’s what this retired couple from Leigh-on-Sea think now, having been rescued by Earth Designs from their hotch-potch garden frustrations. Having moved into their property whilst downsizing, they wanted to revive the garden into something they could enjoy and manage. But they only fixed it in a piecemeal nature, and were left with a garden in an itty-bitty state that had no sense of focus.

Katrina tried to create harmony within the space, linking up the broken-up areas of the garden. She wanted to ensure that the space in front of the summerhouse could be easily accessed from the back of the house. She proposed tank planters at the end of the garden to be echoed on the main patio outside the back door, to help create unity.

The patio that had been laid was too small, and the beds too narrow. Having only recently paid for the patio, they were reluctant to take it up. Working with what was there, Katrina simply suggested extending it.

They had a concrete base ready for the summer house, obviously in the sunniest part of the garden. However in this east-facing plot, Katrina pointed out, they may have found it too hot during the summer and would have been better with it positioned towards the rear of the garden where it was sunny but cooler. Actually, people often prefer to sit outside in the summer.

The bottom of the garden

There was a line of conifers along the rear boundary that served as a good privacy screen from the houses beyond. But nothing grew very well at the back of the garden, and there was a very damp and slippery decking. The couple wanted to repurpose the space and also needed hidden storage. Katrina suggested laying a porcelain patio, which is more tolerant of damp conditions, and including the two tank planters that would provide their own soil conditions. The shed in the right-hand corner was masked by a planting bed filled with leafy architectural plants and a laser-cut, Corten-steel screen.

Don’t let your garden dreams get in a muddle, book your free garden design consultation now by contacting Katrina and Matt on 01702 597587 or email us at info@earthdesigns.co.uk. 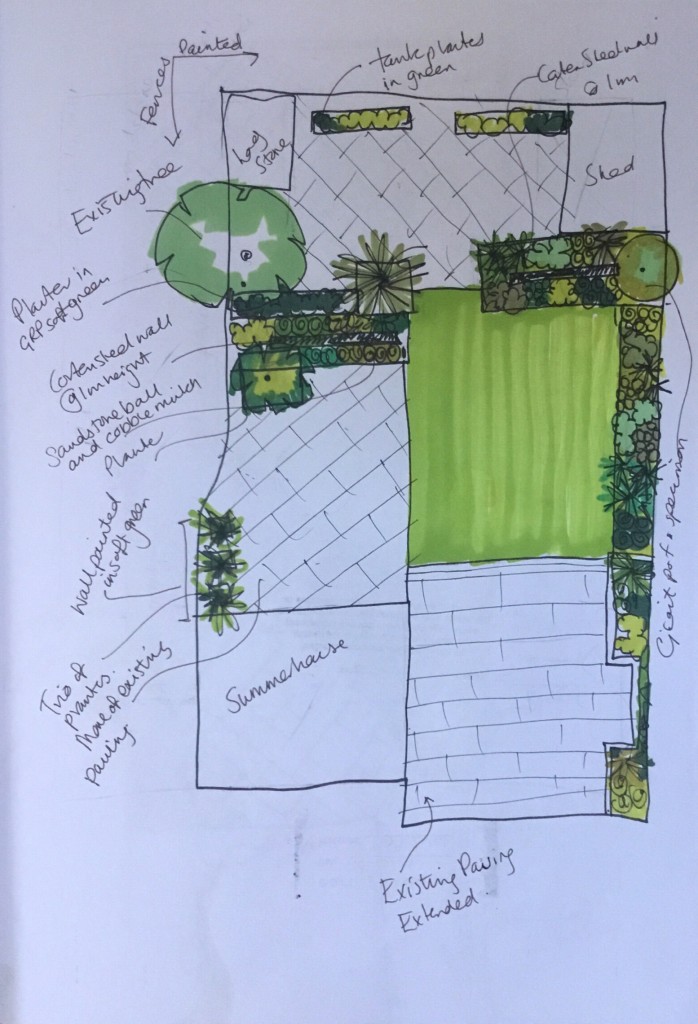