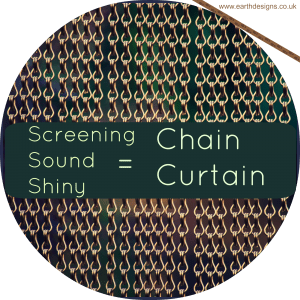 I just love a quirky touch in any garden design. I think it becomes a real talking point, it adds interest and gets people engaged and involved with the space. If you can make that quirky something a tactile material then it really heightens the senses. On a few occasions I have added a chain curtain to the garden design, an unusual material often used to keep flies out of kitchens in professional kitchens. It comes in a variety of colours, gold, silver, bronze as well as other metallic blues, greens, pinks and reds. I think it really adds a dash of va va voom to any space. Its shiny appearance not only adds a touch of luxury to the design, the movement it creates on a windy day can really add an extra dimension in the garden. That said, this isn’t its highest attribute. What it is really useful for is screening in the garden. And not just screening in the way that a trellis will just suffice, its perfect for example, if you wanted to screen off a trampoline. The ability to draw back the curtain in order to watch the children on the trampoline for safety, but then hide the trampoline from view really appeals to a lot of people. I have used this application in a number of gardens and it has worked wonderfully. It is also particularly useful as a screen when you need that privacy but don’t want to compromise on your light levels. Obviously a chain curtain let’s all light through but also gives you a degree of privacy. I like the industrial feel it gives to the garden design, if you add plants in front of it and then plants behind it it also creates the optical illusion of depth, perfect in any small garden. Cheap to install and bought by the length it’s a real winner in my book and one well worth considering if theres a need for garden screening and privacy i but want bang for your buck.