This client contacted us as they wanted some east-facing garden design ideas. East facing gardens can often be problematic, but with a bit of careful planning can actually be a great garden aspect. Katrina went to visit them in Walthamstow East London.

An unusual plot for an east-facing garden design

It was an unusual plot as they had a small area directly outside the back door which was slightly sunken and very shady. Then there was a height difference of about 60 cm, before you crossed a public pathway accessed the adjacent flats left and right. Beyond that was the larger space. Clearly visible from the public pathway, the clients were keen to generate east-facing garden design ideas for this space as they felt very exposed to anybody walking along the path.

Katrina suggested that the lower area to be paved and a L shaped timber decked bench installed to maximise the space. Behind that, on the existing slab of concrete, which would prove costly to remove, she suggested a series of fibreglass planters with a Corten steel effect, planted up with bamboo to increase the privacy.

A pathway down the left-hand side of the east-facing garden design, would lead to a large patio area in the bottom left of the space. Positioned to catch the mid afternoon to early evening sunshine, this space would give the client somewhere to relax and entertain without being overlooked. Suggestion of additional privacy could be achieved by including a large timber beam stretching across the space, which could become the support for a climbing plant as well as giving an opportunity for a pick up for a nice statement garden chandelier.en Design Sketches‘. 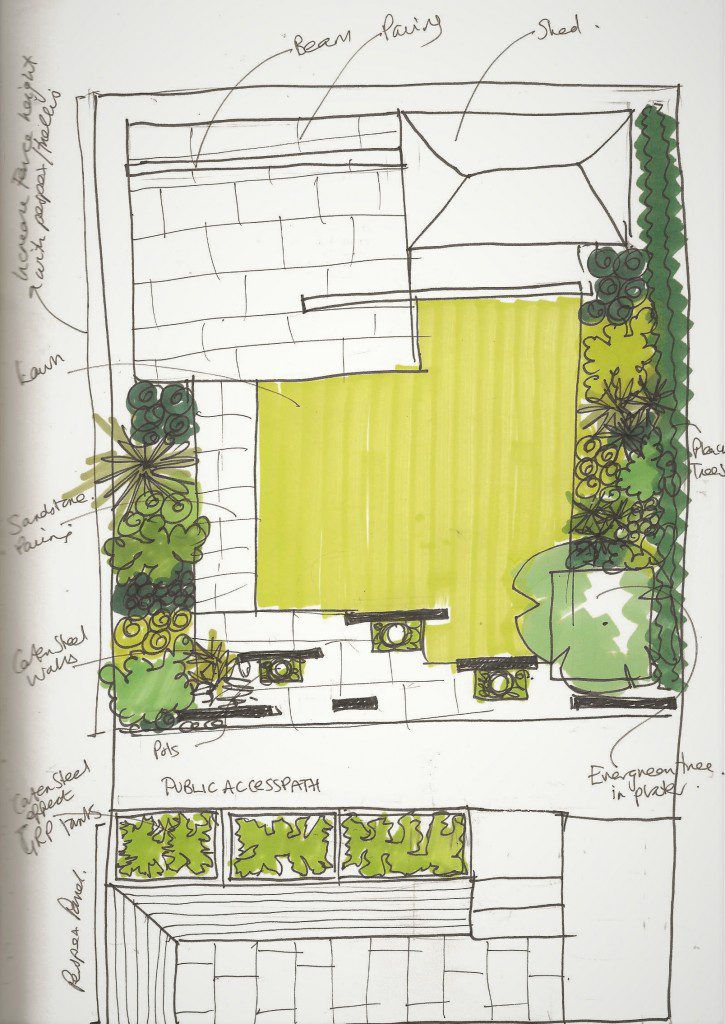 Let there be light

On the other side of the path, a series of garden screens, placed at strategic positions, would help the client to walk the length of the garden without compromising on light too much. Each one of the screens, would act as a backdrop to a pot or specimen plant in front of it.

A shed, positioned in the back right of the space would increase the storage capabilities of the property and make use of the shady part of the garden.

By the fence on the left, there will be increased Perspex or Trellis at the top of the existing wall. On the wall to the right hand side, pleached trees were to be planted. This would help to mask the view of the industrial area towards the bottom of the garden, as well as providing greenery.

The rest of the space was to be filled with grass for family use.

We offer a 2 hour garden design consultation in London and the South East starting from £150. If you need some garden design advice please get in touch.