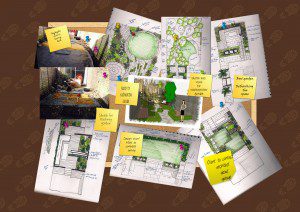 What’s on the Board Week 10

It’s been a very busy week in our London and Essex Garden Design studio this week:

~ The first, in Hackney, wanted to give a simple face lift to their garden. An old boundary wall was crumbling in the back corner and the clients were keen to get rid of a tired and time-consuming lawn.

~ The second client wanted help to design their garden in Bow. Her father had designed a space for them, but they were struggling to get excited about aspects of it. We thrashed out some of the problems and they are now clearer as to what to do with the space.

~ Sunday saw a reunion with a previous client. They have now moved from the property in which we originally built a garden and have invited Earth Designs to make their new garden more exciting. The garden has been previously landscaped and is on two levels, with cream paving on the lower terrace adjoining the house, and a large lawn and rendered raised beds in the upper garden. The clients have commissioned a design to create a more dynamic garden. Matt will conduct the survey next week.

~ The next clients in Walthamstow wanted some ideas on how to revive their gardens space get rid of some of the concrete in the space. They like Katrina’s own garden and would like something inspired by that.

~ A lovely garden in Upper Walthamstow was the next stop, with a 200 year old Mulberry tree and mini-woodland setting to work with. Katrina was very inspired by the possibilities of this garden. The clients were very keen to commission a design package and Katrina drew them a visual to help them understand the levels within the space.

The final stop was anther garden in Walthamstow where the client was looking to demolish her garage in order to increase her garden space. After pacing out the garden and discussing the options for the replacement structure several scribbles later they arrived at a concept which the client felt happy with. She is now looking to discuss the project with an architect to make the most of the structure before commissioning a design.

Katrina is also working on the previously commissioned design in the studio and hopes to be able to take them to presentation next week.

Matt has been working hard in Highgate and has almost finished the project with the artificial lawn being laid in this week. He will return to install the lighting when the fittings arrive from Itay.