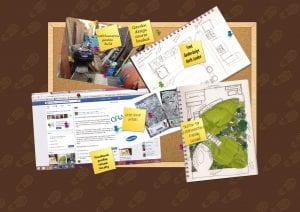 Katrina went on our first garden design consultation of 2015. The client needed advice on a front garden design. Their back garden had already been landscaped a few years ago. The North London property is in a conservation area and the client is keen to recreate a traditional Victorian front garden. The existing wall should remain but they decided the privet hedge needs to go and be replaced with something neater and more dynamic. Katrina sketched out the concept including a raised bed and pleached trees with box ball and lavender under-planting. Flooring is to be reclaimed yorkstone so as not to detract from the existing geometric Victorian paving. The client has just confirmed they would like to proceed with a design package.

Katrina then went to see a family about a garden design in east London. They have recently bought a property in which the garden is a blank canvas and were looking for some ideas which they will roll out over the next couple of years. The client wanted to retain a large area of lawn as she has a young son, but also wishes to add some curves and larger planting areas as she loves gardening. She likes the idea of growing fruit and veg and has already installed a greenhouse at the bottom of the garden.

Katrina has been actively marketing Earth Designs as the new kid on the block for locally based Essex garden design, particularly in south Essex. She has been targeting the local Facebook audience and has been running a competition on their website. Oracle publications, which delivers a local glossy magazine to households throughout the Southend catchment area, has also agreed to run a feature on Earth Designs, which is due to begin in February. The Evening Echo, which covers most of Essex, is keen on doing a ‘get the look’ feature in the next few weeks. Katrina’s garden design course is also proving popular and is being marketed on Facebook.

Work continues with our East London garden build. The decking is pretty much complete and work has begun on the paving for the sideway. The site is very small and contains a fair amount of the client’s bits and pieces, plus materials for the build, so it is quite full at the moment which presents a challenge during construction. Once the sideway paving is complete the clients stuff can be stored there while his existing shed, which was dismantled to make it easier to relocate, is rebuilt and placed on the new decking. This should help de-clutter the space and make working a little easier.