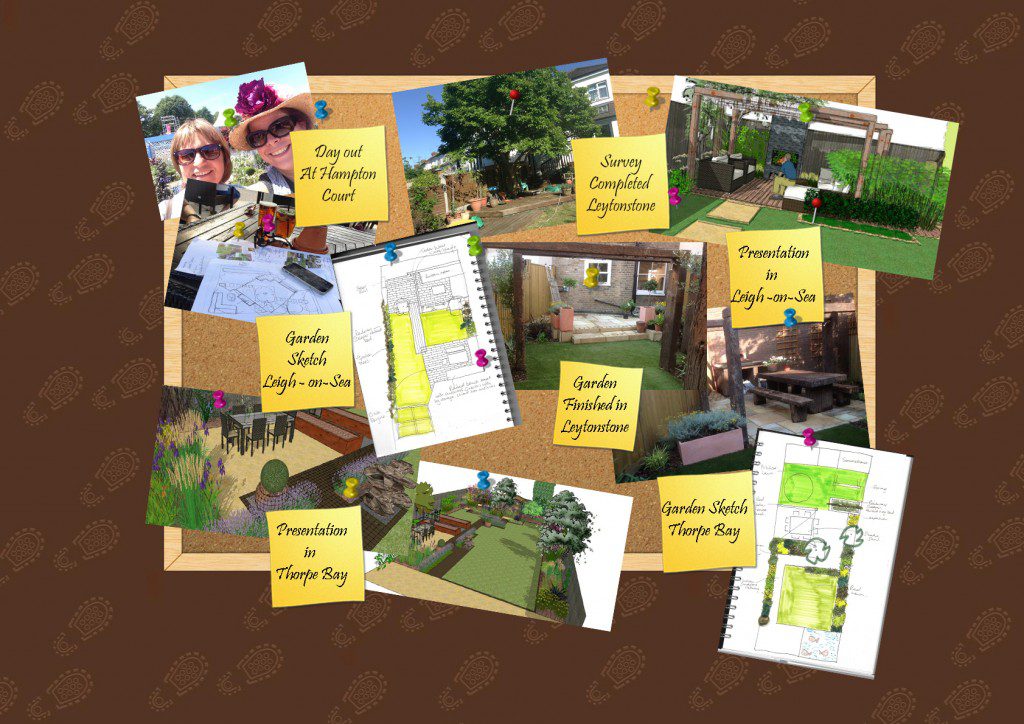 Yet another busy week for Earth Designs!

The first was for a garden design in Leigh-on-Sea, Essex. This was a particularly complex plot as it was over two levels. The space comprised of a fixed seating area on the upper terrace with lawn on the lower terrace. The lower space also included a second seating area and the fireplace. The clients plan to build part of the design themselves but are also looking for a builder to come in and complete much of the structural work.

Katrina also went to present garden design, in Thorpe Bay, Essex. The client is delighted with the design and commissioned a build straight away! The garden design itself will feature a summer house, greenhouse, raised railway sleeper beds, new lawn and a sandstone set pathway. Matt is sending the contracts over to her this week.

Katrina went to visit another client who was looking for a garden designer based in Leigh-on-Sea, Essex. They were after an designer who could create a family garden and ensure there is something for everybody. Katrina suggested relocating the priory at the left hand side of the house in the shady part of the garden. This then freed up the rest of the garden to allow for a large lawn, as well as two patios to catch the afternoon and evening sunshine. The clients were delighted with the concept and loved the fact that the garden designer is local. They will let Katrina know whether they wish to proceed with the design package from Earth Designs.

Another visit to a client in Thorpe Bay. They were looking for a garden designer in Essex, to rework the existing garden which was very attractive and quite well established. They wanted to open up the lawn area and turn the bottom of the garden into a children’s play area. Katrina suggested a few ideas which included relocating the pathway down to the left hand side and stretching part of it across the width of the garden which could then maximise the space for dining and entertaining.

Matt went to complete the site survey for the garden design and build in Leytonstone, East London on Monday. The levels are quite complicated, and the garden is going to be quite a difficult clearance job as there is no side access and the house is considerably higher than the garden.

Matt also continued working on a landscaping project in Leigh-on-Sea, Essex and installed the all composite decking. The team also finished installing the sandstone sett strips for the pathway and when finished the curved pathway will comprise of a series of sandstone sett strips with a gravel and sedum infill between each strip.

Earth Designs had a lovely full page spread in the magazine Real Homes this month. The article interviewed one of our previous clients who had a garden build in Hackney, East London a couple of years ago. Marcus Harpur, a garden photographer, not only took photos of the garden but also went to interview the client and liaise directly with Real Homes on our behalf. The article is fantastic and we have had some very favourable comments on the back of it. Check out the Earth Designs Facebook page to see the full article.

Katrina finished her week by attending Hampton Court Flower Show. She had a meeting with the RHS designers who are involved with the show in 2016. Katrina met up with her colleague Joan Mulvenna from Garden Design Manchester and the pair are planning on doing a collaborative design and build together. It was a really useful seminar and despite the scorching heat, lovely to walk around and look at the show gardens and discuss concepts for together.

Lastly, our new website has now been launched! We are extremely proud of it and would love to hear your thoughts and comments! We hope you like it as much as us! https://www.earthdesigns.co.uk/