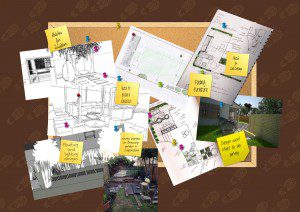 Katrina has been busy in the Essex and London Garden Design studio this week carrying on with the projects that are coming in thick and fast. She is busy designing for the family garden up in Loughton. It is quite a large project over two terraces and seeks to compliment the interior renovations the client are currently carrying out. The layout is drawn and planting and lighting schemes are in the process of being designed, while Matt is putting the budget together.

Katrina won another design job this week for a landscape design in Woodford. The client has completed an impressive self build and is looking for a garden to compliment the interior. The site is complex as it is spread over several levels and includes two steep sets of steps. With Katrina’s guidance they have decided to re-think the exterior space and as a result they commissioned a design package. Matt is due to conduct a site survey next week.

Our London Garden Designer, Katrina also attended a garden design consultation for a lock cottage next to Victoria park in Hackey. The couple have renovated this unusual lockside cottage with listed status and are now looking for come ideas for their exterior space. They wanted to cram a lot in including storage, dining for 12 and yet still retain some privacy from the passers by. Katrina developed a concept involving folding furniture and laser cut screens.

Matt has started works on the Brewery garden design in Leytonstone. The client has helped to reduce her budget by clearing the space herself and so works could commence much quicker. Matt and the team have been finishing off the clearing and marked out the space ready to start laying in the footings next week.