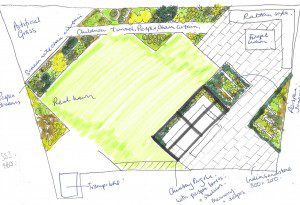 This client had recently bought a house and were looking to create a family garden design in Thorpe Bay, Essex. The garden itself was already well established and beautifully landscaped, however they did not feel it met with their needs so were looking to redesign the space.

The existing patio had patio doors which were proportionately small to the rest of the garden and there wasn’t enough space for them to include a table and chairs or a comfortable area to sit around. They have two young children and wanted to create space for them to enjoy the garden. The garden was quite steep so we designed it on a 45° angle to the house to make the garden seem wider. Running down the right hand side was a large patio with indian sandstone slabs measuring 800 by 200 millimeters wide. The Indian sandstone was to be laid in a way that would create bold lines across the space. Directly outside the patio doors would be a french antique timber pergola and would provide respite from the sun. This was to be backed by a raised bed constructed from railway sleepers. Perspex lenses were to be included in the pergola to create a playful and childlike quality. These screens would also be incorporated in the raised bed adjoining the pergola which would be backed by the patio which would house a rattan sofa and an indian fire pit. Lawn swept across the back of the space would lead to more perspex screens and would be cut off the bottom left corner to create a secret area for the children. Artificial lawn was to be the surface of choice here behind the screen and would allow for a multitude of uses such as a sandpit or other play equipment. The area was to be partially screened with the use of perspex screens and a chain curtain. A tunnel was to be placed across the back width of the garden which was to be of differing heights. This was to be constructed with perspex, chain curtain and timber frames. A trampoline was a potential consideration for the area down the left hand side as both parents felt trampolines were ugly but will still get a lot of use by the children.