Skip to content
Fashionable garden design. We are on the lookout for what is bang on trend

What is the latest fashion in garden design? With Chelsea only weeks away, everyone is waiting with baited breath to find out what’s the latest trends, colour pallets and materials the world of garden design has to show the public. Just up the road, another exhibition is taking place which marries the idea of fashion and nature.

Beginning in the 16th century, ‘Fashioned from Nature’ at the Victoria and Albert Museum tracks how nature has influenced fashion, but also help materials found in nature has been used Of the century is to create fabrics and garments.

From detailed botanical embroidery to earrings made from birds of paradise, the relationship between nature and fashion is complex and often controversial. This exhibition will take you on a journey through centuaries of fashion that have drawn inspiration from, and planted the natural world-through to the contemporary innovators who are directly addressing the issues caused by the industry.

Starting around 1600, the exhibition begins to look at how we use resources in nature to create garments. From silk and cotton right through to more modern practice. Everything from dresses to shoes is present in the exhibition. Here we see a pair of women’s shoes from around 1720. Created from Worsted wool, linen and Leather. Beautiful embroidered silk and linen waistcoat depicting make a monkeys was copied from illustrations in the Comte de Buffon’s natural history in Encyclopedia of 1749 to 1788. We can see the monkey offering his companion a fruit, this is a crap eating macaque. Is a lion tailed macaque. 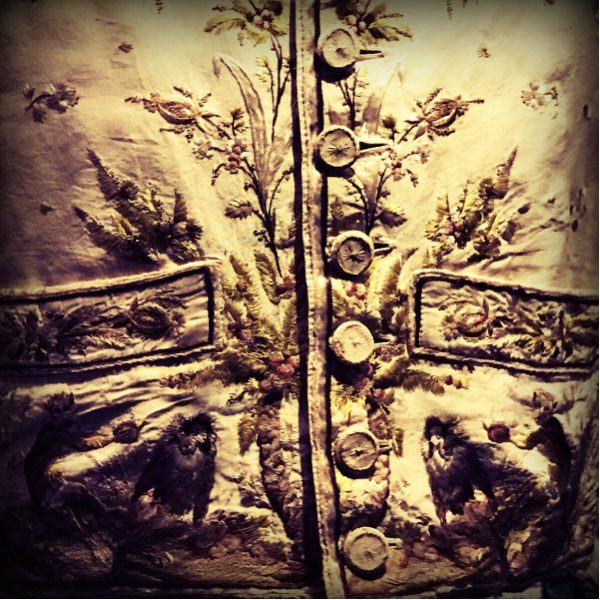 The British cotton from which this dress is made is block printed with trails of flowers. Dating from 1780, this dress was altered 20 years later to give it a more fashionable appearance. Garments from this period often shows signs of updating and repair. Clothing was valued and not disposed of so readily as today. 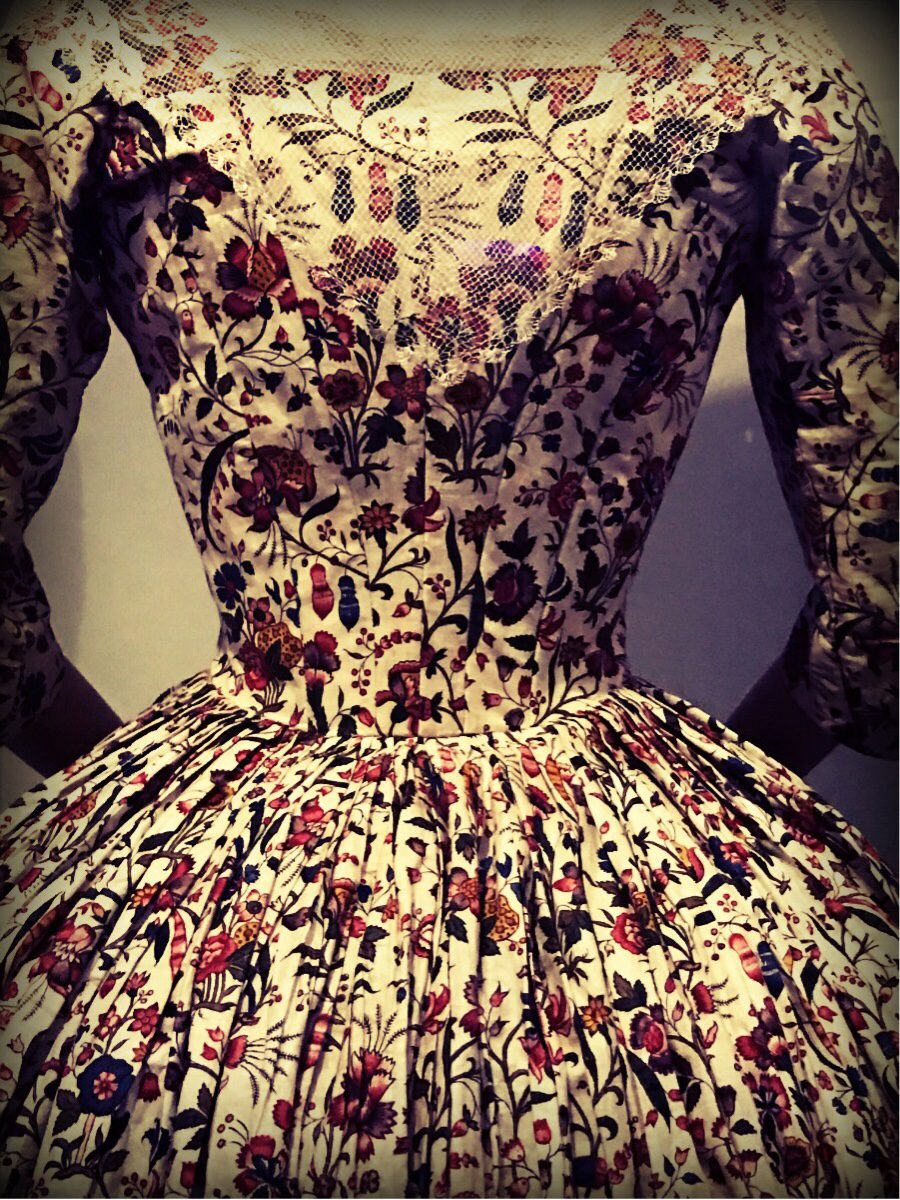 Early recycling. This dress was updated to reflect modern fashion 20 years after its original creation.

Through the exhibition the construction of the garments are dissected. Whether it is in their construction, or in the materials that are used. From new discoveries in dying fabrics, to different materials used to create the fabric. In this garment, old and new methods were used. The dressmaker has stiffened the bodiced with baleen (whalebone) and that supported the skirts with underskirts, A horsehair pad and two factory made steal half hoops, which are held in place by industrially produced elastic rubber tape. The outer drape is off plain wool woven on a power loom. The Silk velvet was probably woven by hand with two heights with of in the floral pattern in imitation of 17th century Lace from Venice. 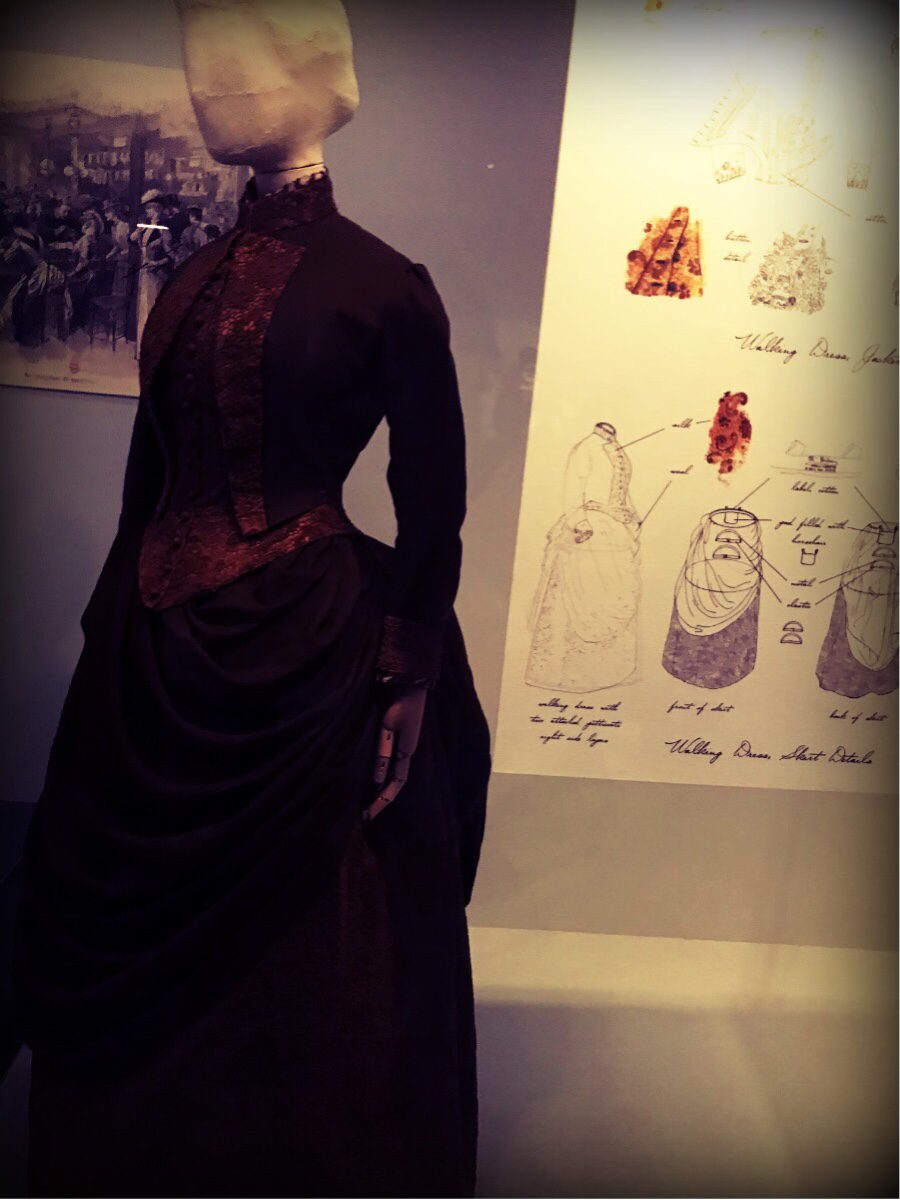 A French walking dress from around 1880. Old and new methods were used to create this outfit.

Using the exhibits as inspiration

Here we have an x-ray off the hat believed to be teamed with the walking dress. The starling on this hat has had its feathers supplemented with those of another bird. Probably a goose. The maker has rearrange and then bleached, died and painted feathers to suggest a larger, more exotic species. The beak has also been modified. Its skin has been peeled back to elongate it and it’s too has been dyed. The stark photographic graphic nature of the x-ray to inspire me to make a fashionable garden design sketch. The garden in question sees a large elliptical area of pebble mosaic reminiscent of the brim of the hat, Coupled with a large area of lawn.

One of my favourite modern designers is the milliner Philip Tracy. His creations are works of art and I love the way they marry a practical item with such craft. Here, a fashionable garden design is delivered with inspiration from “blowing in the wind” the dynamic hat, created by Philip Treacy’s. His windswept veil, conjoures memories of high winds whipping along everything in their path. At the same time perhaps feathers seem to grow around the head, forming an organic green curtain that protects the wearer. This garden design sees a patio, with huge sweeping bamboo archways spanning the width of the seating area, providing the user with shade and shelter. Where these large archways end, huge Stipa gigantica sweep out across the planting bed to create movement and dynamism. 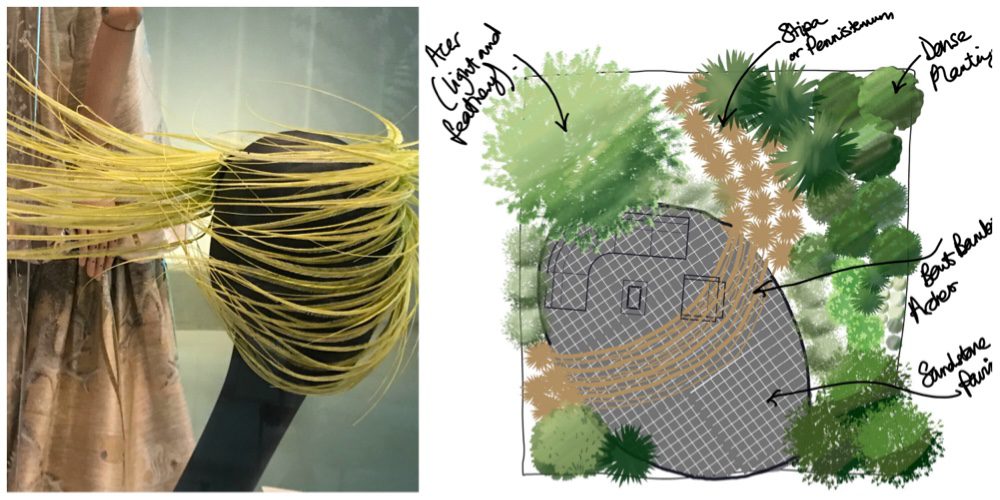 On the upper level, we explore fashion from the 20th century and how, with modern knowledge, technology and ethics, we are trying to make fashion environmentally sound and sustainable. Many modern fashion designers can be seen here from Vivian Westwood, to Alexander McQueen. A dress by Jean Paul Gaultier, looks like the old fashion fur with the face of a leopard showing across the bust. However, on close inspection , You can see that it is all an illusion and that the leopard skin is actually made entirely from beads taking over 1000 hours to create. The whole area is dedicated to contemporary fashion choices with areas in courage in a make do and mend approach, as well as different sustainable materials that can be used to create garments. 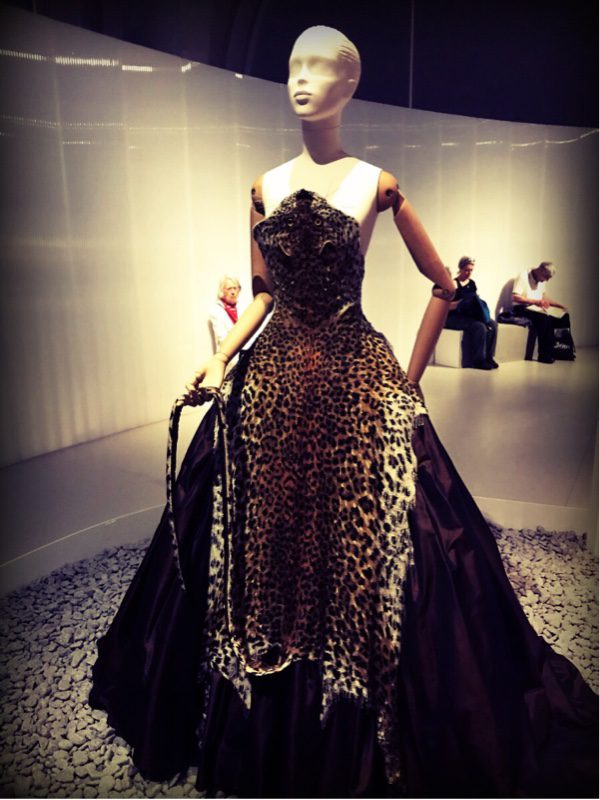 What appears to be an animal skin, is actually made from thousands of tiny beads. Shown here in this Jean Paul Gaultier ‘cat woman dress

Fashioned from nature examines how close and production has changed over time and the challenges faced by all of us today-to create and buy clothes it’s a beautiful and responsible, and to value our clothes small.
Choose carefully; look good
Where wisely Siri: feel good
Recycle : be generous

forefront2018-05-14T13:39:59+00:00May 14th, 2018|Garden Design London - General chit chat, Inspiration for Garden Design - The Ideas Garden|Comments Off on Fashionable garden design. We are on the lookout for what is bang on trend
Page load link
Email
Call
Go to Top