These clients contacted us looking for Garden Design in London and wanted free garden design sketch for the house they have lived in for 7/8 years. They have tackled various areas within the garden in a piecemeal manner and are now ready to tackle the whole space with a fresh new approach, looking at wa 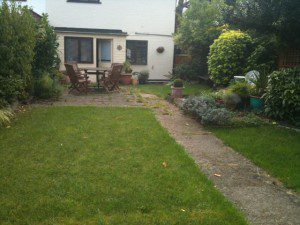 ys to bring the area together to make one unified space.

The design responds to this need by creating clearly defined areas. The client is a keen gardener and would like the opportunity to grow some slightly more exotic plants within the space, so we have suggested larger beds which use planting to form part of thel backbone of the garden. They like tropical plants, so we have suggested an architectural planting scheme. They are going to build the space themselves so it was important they had a scheme which was achievable for a self build. 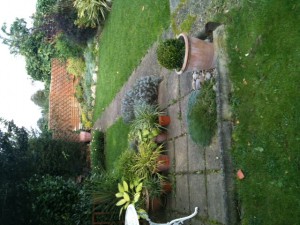 Two Indian Sandstone patios feature in the garden – the first outside the back door and the second at the bottom of the garden. These are linked with a walkway, covered with metal archways to encourage evergreen climber coverage. Grass is kept to a mininum. The couple like a Mediterranean look, so the second half of the garden allows an adaption of the existing rockery with a slightly more structured approach, in which the stone/rubble edging is replaced with railway sleepers and complemented with parts of broken terracotta pots filled with alpine rockery plants. A pergola gives semi-shade and privacy to the second paved area at the end of the space.