This client was looking ideas for a garden design in Leigh-on-Sea to freshen up the exterior space of the property she has lived in for a number of years. She has raised a family in the house and so the garden has been used for all sorts of sports and games.  She has never really had the opportunity to make the most of the space or have the garden she would really like. 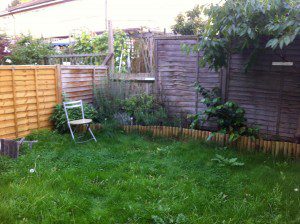 Earth Designs suggested she build an extension rather than a conservatory to the back of the house as it will give her the much needed extra downstairs space she requires and will present a more usable space than a conservatory would. Without final plans drawn up for any extension, we had to make a few assumptions about exit points. We also advised getting the existing shed removed as it has an asbestos roof. It will open up the area next to the house a lot more and create a more usable area for entertaining. 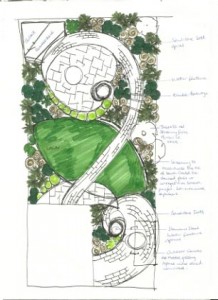 The design is centred around a large double spiral, one end at each end of the garden. Directly to the right of the proposed extension would be a small patio, large enough for a table and chairs for 4 people. A rendered brick wall will act as a backdrop to the patio, upon which the client could display some outdoor canvases of her own photography. A stainless steel water feature will add an extra dimension to the space.

An arc shaped Indian sandstone paving will join the proposed exit for the extension and bridge the gap between the side area and garden proper. A long sandstone sett pathway arcs down the space bisecting an elliptical lawn edged in setts. A series of timber screens with various panels of stainless steel mesh, coloured Perspex and wrought iron help define the shape of the lawn. Orange espalier trees behind this help screen the garden front the bank of houses to the right.

Timber archways mark the entrance to the second half of the garden, and the other end of the spiral, where the pathway winds round and leads to a corner summerhouse and storage area. A second, larger patio area offers ample space for entertaining and relaxation. Flush flower beds planted with box balls mark the edge of the spiral.