Follow the weekly diary of a London Garden Design Company: 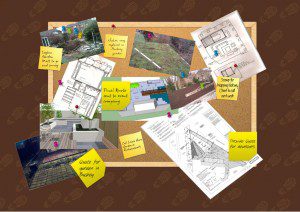 Katrina was contacted this week by a couple looking for a landscaper in Leyton. They bought their house 4 years ago, and inherited a garden which had been built in stages by the previous owner who had used a combination of rubble and salvaged items to create quite a haphazard space with several levels. The client has a set budget to which we need to design. They would like to get an indication of possible costs before commissioning a garden design, so Matt will be meeting the client on Tuesday to view the garden.

We were also contacted by a couple who would like a design for their London roof garden overlooking the Thames Barrier. They bought their penthouse apartment in August and have recently completed the interior, and are now looking to renovate the exterior ready for the summer. Katrina visited them this week and sketched out some ideas, they will coming back to us when they are ready to proceed with the design.

Matt has installed a new sedum roof on the garden office for our clients in Hackney, as the finishing touch to the garden he worked on towards the end of last year. The original sedum roof had died due to needed the roof re-laying as part of the garden renovations.

Matt is in the process of putting together a quote for a property developer. It is a large planting project for a site in Bow, East London

Matt will also be going to meet a prospective client in Bushey, Hertfordshire. He has a design which he commissioned from another garden designer, and has asked us to provide a quote for the build.

We have commissioned a garden postal design for a client for their garden in East London. They are planning to build the garden themselves, so decided that they do not require a full design package.