Since December we have been compiling a Romanian garden design scheme for a client in Romania. They requested an interior design as well as exterior and the last part of the project was the garden design. 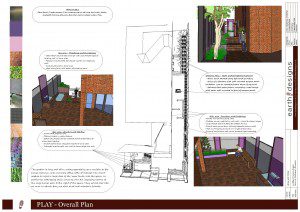 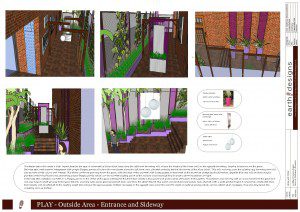 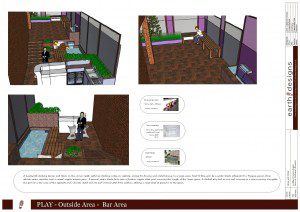 The garden is long and thin, acting essentially as a corridor to the house entrance, and currently offers little of interest. The client wishes to inject a large dose of the ‘wow’ factor into the space, in particular addressing their concerns over the imposing nature of the large house wall to the right of the space. They would also like an area in which they are able to sit and entertain friends.

The design sets out to create a high impact feast for the eyes. A colonnade of silver birch trees along the left hand boundary will mirror the height of the house wall on the opposite boundary, helping to balance out the space.

Stainless steel mesh screens interspersed with purple Perspex panels will form the new facade along the left hand wall, situated centrally behind the trunks of the silver birch. This will not only cover the existing ugly boundary but will also provide winter colour and interest. This theme continues part way down the space, with the trees under-planted with hardy grasses, to terminate at the second set of steps by the front door. Opposite this area will be three Acrylic planters containing Phormiums, framed by purple Perspex panels which can be mounted slightly proud of the walls to allow backlighting to create a stunning feature at night.

A stainless steel waterfall mounted on a Perspex panel in the centre of the space just beyond the front door creates a focal point and gives a sense of division to the garden. This feature will not only add an aural element to the space but will also help to create privacy to the space behind, allowing extra social spacing screened from view from the street. Behind this screen will be three half arches, each adorned with a globe pendant light. A long bench constructed from deck boards, will be attached to the existing raised bed and give the space purpose. Outdoor canvasses on the opposite wall allow the client to create an exterior gallery which can be altered when necessary. This will help break the unsightly wall up further.

A hardwood decking bench and table in the corner (with optional decking cubes on castors), allows for dining and entertaining on a large scale. Next to this will be a water blade attached to a Perspex panel, from which water cascades into a raised copper mosaic pool.  A second water blade falls into a further copper tiled pool running the length of the lower space. A decked day bed at one end narrows to a seat running alongside the pool to a bar area at the opposite end. The bar itself will be self-illuminated from within, adding a large dose of glamour to the space. 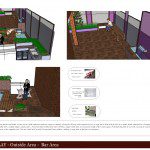 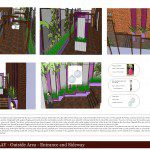 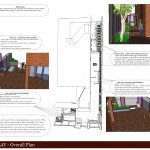 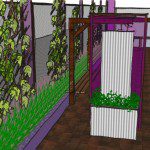 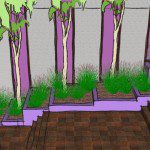 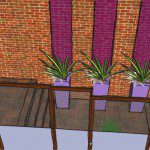 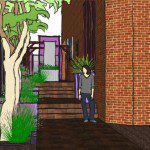 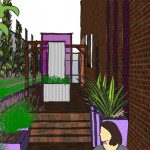 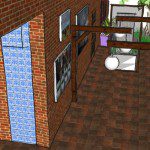 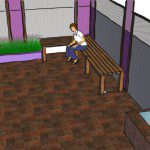 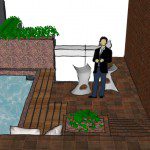 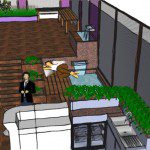 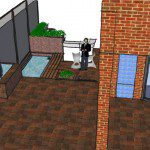