Skip to content
Garden Design Top Tips: Garden Buildings
There are many uses and reasons for a garden building: a cosy retreat; a workshop; a gym; an office; a children’s playhouse; an artist’s studio; or simply an excuse to venture down the garden. Whatever the reason for having one, a garden building – that is, a structure that has a roof rather than an open structure such as a pergola and gazebo – can add an extra dimension to any space. 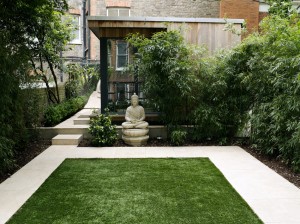 Britain’s love affair with the garden building began on the grand country estates with structures such as the garden grotto. The word grotto is applied to any artificial or natural cave that is associated with humans. Originating in 16th Centuary Italy, the popularity of the garden grotto quickly spread to France and later became a feature of English landscape design. In warmer climes the grotto had a number of functions, serving as a place to retreat from the sun, a bathhouse, and occasionally even a chapel. The outside of the grotto might take an architectural form or be designed to appear as a rocky outcrop. On the inside, the grotto would be an Aladdin’s cave, with decoration that might include a mock temple, ornate fountains, faux-stalactites and even imitation shells and gems. Sculpture and carvings would feature subjects from mythology and ancient religions, such as mermaids and river gods whose urns overflowed into pools.  Examples of grottos in England can be found in the gardens of Painshill Park, Stowe, Clandon Park and Stourhead.

By the 18th century the fashion for garden buildings in British landscaping had shifted from the grotto to the hermitage and folly. Promoted by notable landscape architects, such as Capability Brown and Capability Brown and Humphrey Repton, a hermitage was seen as an essential part of the landscape, symbolising a gentleman’s desire for a retreat, getting back to nature away from society and the  demands of modern life. Also popular during the 18th century were follies: grand decorative buildings which were constructed purely for their ornamental value. They often resembled Chinese temples, Egyptian pyramids or ruined abbeys, and could not be used as a real building at all.  Similarly temples were a predominant feature of the landscape of an estate.  Inspired by visits to Europe on the Grand Tour, temples acted as focal points to the magnificent vistas of many an estate.  Fine examples of the garden temple can be seen at Stourhead, Stowe, Rievaulx Terrace,  Painshill Park, Mount Edgcumbe or Studley Royal Water Garden. 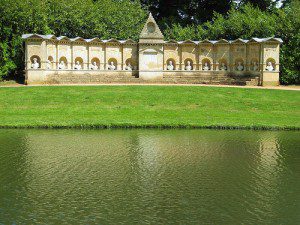 In the late 19th and 20th Centuries, as societal structure changed, landscaped gardens ceased to be a preserve of the aristocracy and landed gentry and became popular among the middle classes, albeit on a less grand scale. Buildings became a prominent feature in our gardens. Whether it be an allotment shed or artist’s studio, the garden building has become an increasingly stylish and/or practical feature of the contemporary garden.  What is it that makes a garden building so appealing?  From childhood we strive to create places to hide and to play in.  From the sheet over the washing line, to the shonkily constructed tree house, it is instinctive in many of us to create our own, unique hide-aways.  It’s the childlike sense of adventure and exploration that remains within us into adulthood to a greater or lesser degree.  The term ‘outdoor room’ may have become clichéd but it is a concept that has been popular for some time.  Sissinghurst Castle in Kent has garden rooms, screens of mature hedging create an enclosed, sheltered space to relax within and enjoy a feeling of privacy.  The outdoor room that is so popular now also benefits from our desire for sheltered hiding places or again like the hermitage a place where we feel a connection with the outside world with the added benefit of enclosure.

What is the primary function of the garden building?  An outdoor office, additional room, studio or gym becoming more common place due to our ever expanding population?  Particularly in our cities and towns more demands are being placed on our built environment as property developers snatch at pockets of land and our houses bulge outwards, upwards and now commonly downwards.  Garden buildings range from smaller structures that could be used as a children’s playhouse/tree house  peaceful place for meditation or a location for a spot of al fresco dining, to the more permanent solutions ideal for outdoor offices, or as an additional room: an extension of your house.  The smaller structures come in a variety of forms and usually have a height of approximately 2.5 metres.  Many are spherical or pod-like and are constructed from glass, timber and steel.  Another spherical product on the market is a rotating spherical lounger .  This garden structure checks one more thing off the designer’s wish list which is movement in the garden.  This is most conventionally through the organic movement of a plant in the breeze.  In the case of the rotating orb its movement is down to the disgression of the user who has the choice of rotating it by hand, to either follow the sun or seek shade, or alternatively to make the most of a chosen vista.  These are ideal for an outdoor room in the smaller London garden.  Similarly suitable for the smaller plot are the more hand crafted timber structures which may have shingle or thatch roofed or perhaps have timber sides with portholes.  Due to the style and nature of the construction materials, they are often more at home in a jungle-like or tropical garden.  These structures certainly fulfil our desire for play within the garden.  Still of the same approximate dimensions are cube shaped structures, again open sided these structures offer you with a chill out space, somewhere to dine or a den-like space where children could host a sleep over. 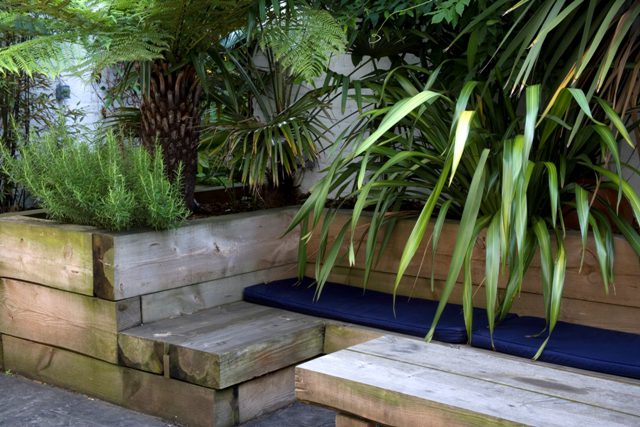 A Garden building that will never lose its appeal is the timeless treehouse.  Traditionally built by a doting Dad or granddad, over recent years the humble treehouse has been launched into another stratosphere (and price bracket) with a host of companies offerering bespoke treehouse manufacturing. Some companies even offer a treeless treehouse building service, so even the smallest urban garden can enjoy the fun. The buildings can be luxurious, with glazing, plumbing, electricity, wood burning stoves, and more, available as extras. These tree top fortresses maintain their appeal for a number of reasons – it is easier to hide from parents halfway up a tree, they have a magical, fairytale image, they give a sense of adventure and ‘safe’ danger, and for adults they can even be a place to entertain guests.  And half the fun of a treehouse is in the entering and exiting, clambering up a swaying rope ladder or launching oneself down a fireman’s pole.  Child-friendly gardens can be done in a number ways and do not have to have a negative impact on the look of the garden.

Garden buildings can be either positioned as a focal point, clearly visible from the house or hidden partially or fully from view.  They can be a sculptural statement, stark counterpoint to the surroundings or in a more minimalistic space they can complement the landscape.  They can also blend into their surroundings.  If the latter is to be done successfully then choice of material, positioning within the garden and integration with the landscaping of the garden is vital. 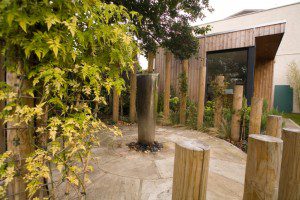 If you are considering a garden building there are a number of factors you may wish to consider.  Firstly, its visual impact as previously discussed.  Secondly, some more practical considerations.  If you are considering a garden building then the materials used in construction should be carefully considered as they may have on-going maintenance implications.  A timber framed building, for example, will require scheduled maintenance every 2-3 years.  If it’s a garden office or extra outdoor room you are after many companies offer either modular or bespoke solutions, from a modest starting price in the region of a few thousand to however much you can afford.  The more high-end solutions offer separate rooms such as a kitchen, and can be up to four storeys if required.  Again, another practical consideration is whether planning permission will be required.  Some of the more heavily constructed bespoke solutions can be attached to the house as a conservatory or be free standing and offer endless possibilities such as the inclusion of balconies and external decking.  These solutions are likely to require planning permission, which some companies will seek on your behalf as part of the cost of the building.

After something a bit different?  The possibilities are endless, a structure made out of bottles for instance, or a dome shaped dwelling, or perhaps a timber structure that doubles as a sculptural playhouse for children. 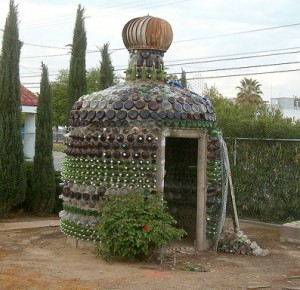