Do you remember those rotating metallic spiral wind-catchers that were are often sold at hippy shops. They made your eyes go funny in the way the magic pictures did in the 80s. I loved those pictures and I remember in my mid-teens everyone had them – you had to go bossed eyed to see the Statue of Liberty in 3D, or Ayers Rock at Sunset…. oh the fun we had! 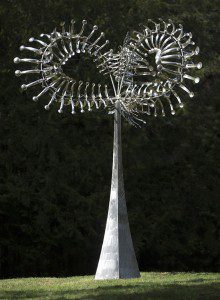 Antony Howe has taken it to the next step with his amazing kinetic sculptures. Movement makes sense of these sculpture. If they were static they wouldn’t mean much to us, but with the wind behind them they come alive and dance across the landscape. Now I am not sure that on this scale they would work as a garden sculpture, at least not in the type of gardens we usually work in. They would command all the focus. However I do think in a public space or indeed maybe as a series on a smaller scale they would be very exciting. Their forms remind me a little of the work of Anthony Goldsworthy, whose simple installations disrupt the natural environment while remaining sympathetic to it.  It seems almost organic but clearly has been created at the hand of man. Add a slug of movement to it and it becomes theatrical. Impressive stuff.