Skip to content
Help needed – I have a back to front garden! 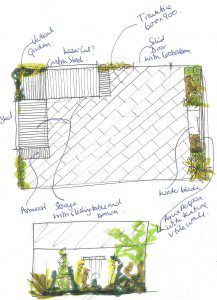 This client was looking for a London garden designer. They had no back garden but have a small area at the front which they’d like to make the most of. The client wishes to maximize this area so that they could squeeze in an area for entertaining and dining. They wanted to make this into a courtyard space which would be suitable for them to relax, incorporate storage, barbecue and provide an attractive appearance from the outside as well as the inside and remain secure. Katrina designed two fixed day beds which would be constructed from decking with storage underneath. Armrests would give the feeling of luxury and the client would also source some homemade bespoke outdoor cushions for it. The daybeds could be used as loungers, as well as benches for dining and a folding dining table can also be placed under the seats. A laser cut corten steel screen was proposed to provide the backdrop to the front boundary with a vertical garden as a consideration for the rest of the boundary walls. A stainless steel sheet would provide a nice reflective surface for the left hand boundary by opening the space up and throwing lots of light in. Travertine paving measuring 600 x 900 works well here and we suggested that this should to be laid in a 45° angle stretching the space from corner to corner. A solid door with a letterbox and keypad entry will provide the necessary security. A water blade water feature mounted against perspex on the right hand boundary would help mask the noise from the outside street and a flush level water rill could also be included across the patio should the client desire. The existing wall would remain but would be topped with perspex to allow the light to come through but still retaining privacy.