Skip to content
Made with love: Leigh-on-Sea garden designer conjures up a creative solution.

Although I rarely design gardens for friends, there have been occasions when I’ve been hijacked at social events (and even had invitations engineered) by people wanting to mine my skills and knowledge for free. ‘You must come round for dinner and have a look at our garden?’ “Oh, you’re a Leigh-on-Sea garden designer? I have a shrub at the bottom of my garden with yellow flowers, can you tell me how to prune it?”. Unfortunately some people view what I do as more of a hobby than a profession honed through years of experience and hard work.

John and Anthony are different though. John was one of my first clients way back in 2003 and I have remained close friends with him, and more recently Anthony, ever since. They are two of my most favourite people, so much so that they are Goddaddies to our two young sons. They are adored by us all. 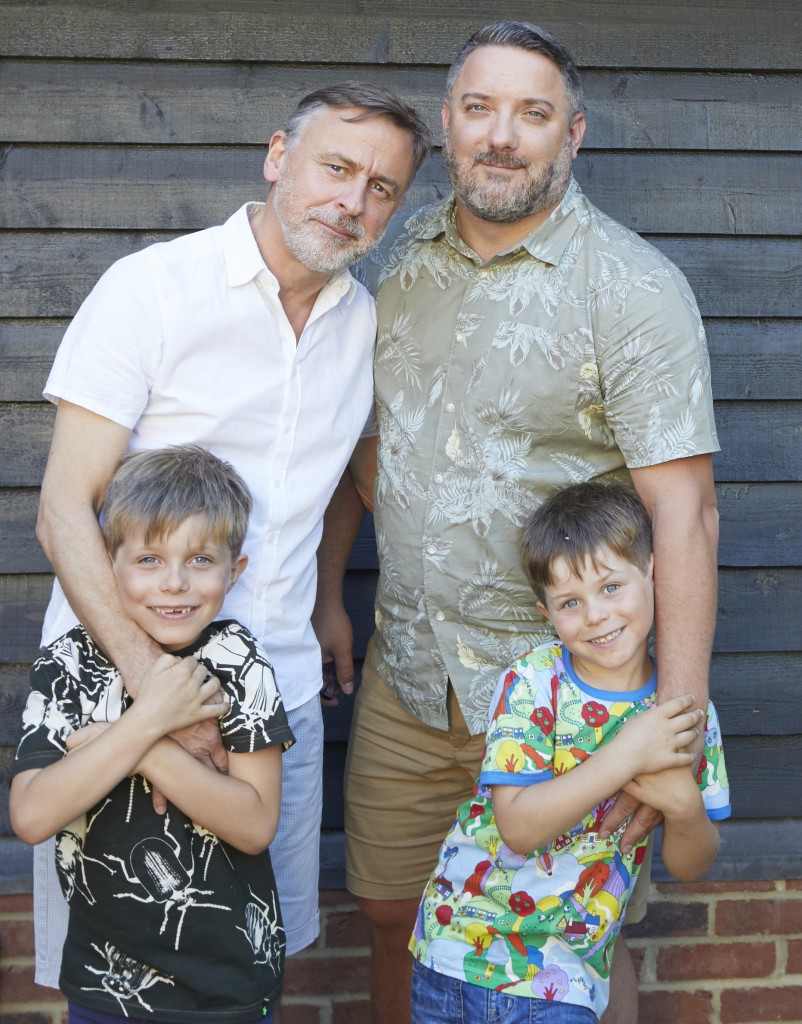 So, I was a little mortified that when they decided they wanted to change the garden in their current home, they didn’t immediately turn to me.

“We thought you were too busy, we didn’t want to bother you”.

“It’s a wedding present, of course I will design your garden”

“I don’t like plants”. Anthony was really not bothered about the garden. Naturally he wanted a nice space, but didn’t care for gardens. “I want a lawn”.

Both the boys work long hours, so we needed to create a space that was low maintenance, practical and yet would give them somewhere stylish and inviting to relax and entertain. They were keen, initially, on replacing like with like. The large raised pond at the bottom of the garden was to remain, as was the fairly ugly brick outbuilding. Anthony, as mentioned, was very keen on retaining some lawn.

I started to work up some ideas with them, and slowly managed to persuade Anthony that if we managed to ditch the lawn in favour of more planting, the effect would be more pleasing and easier to maintain. I suggested that simply turning the landscaping on an angle would make the garden feel like a very different space. 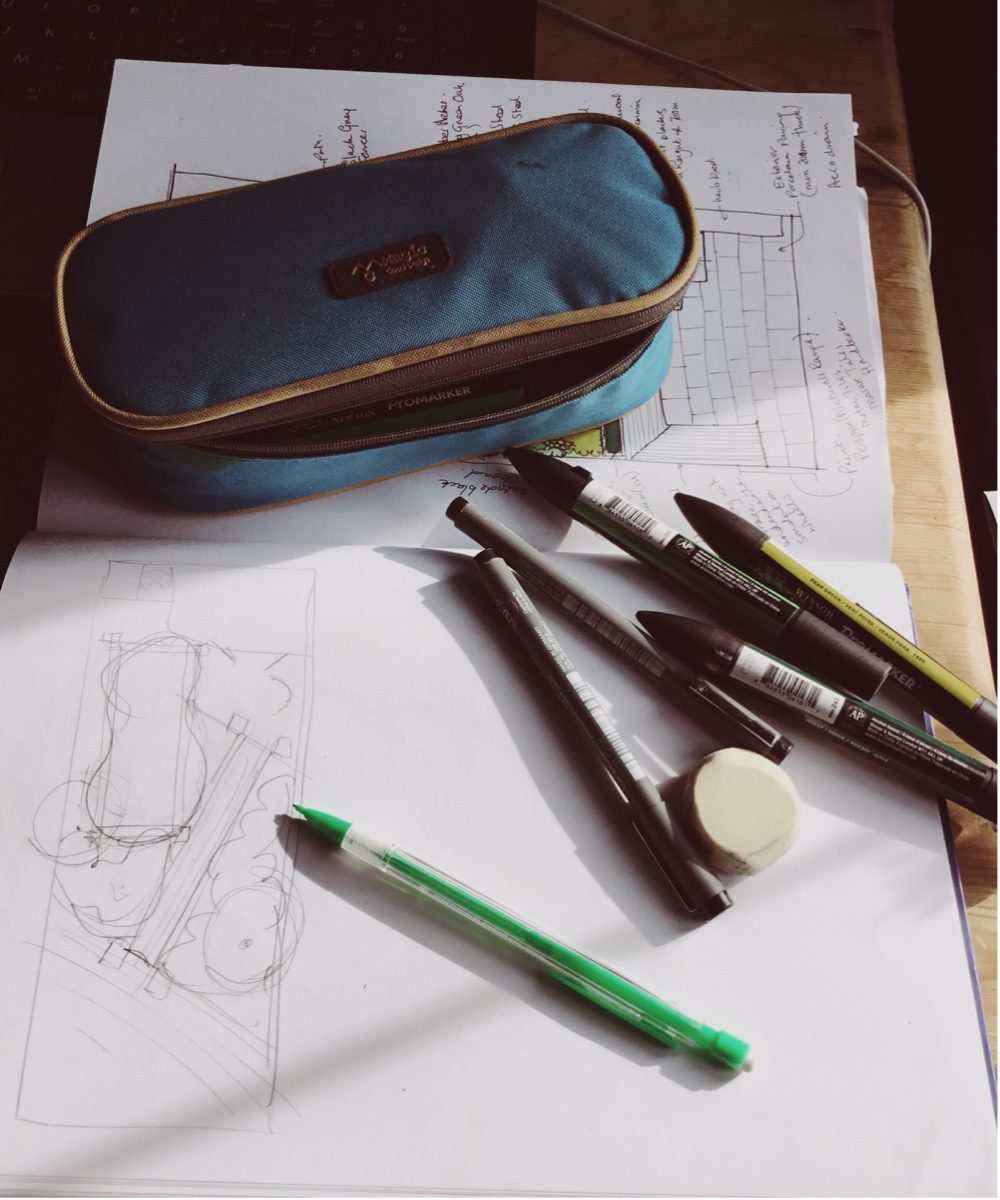 This Leigh on Sea garden needed putting on an angle

As the boys were on a tight budget, I was keen that we used a few exciting materials so that they could really feel that the garden had the wow factor. The pond needed to remain, so I suggested rendering it and adding some shiny metallic glass tiles to the top to make it more glamourous. Instead of a timber pergola (to protect the koi carp in the pond), weathered Corten steel laser cut decorative panels would provide a more exciting canopy, casting shadow and creating patterns in the space. A seat built into the side of the pond would allow somebody to stop and look at the fish in comfort, while helping to integrate the large feature into the rest of the design.

A space to relax next to the Koi pond

The fences around the boundary were mismatched. They had a beautiful established wisteria which they wanted to retain, but, as it always the case with small gardens, it is difficult to hide the boundaries. They can be very unforgiving. I suggested drenching them in a dark grey fence paint to provide an elegant receding backdrop to the planting. A brick wall by the house (which is visible from the conservatory) would be clad with a panel of Mineral Grey perspex from their Naturals range, to provide a sleek, contemporary look. 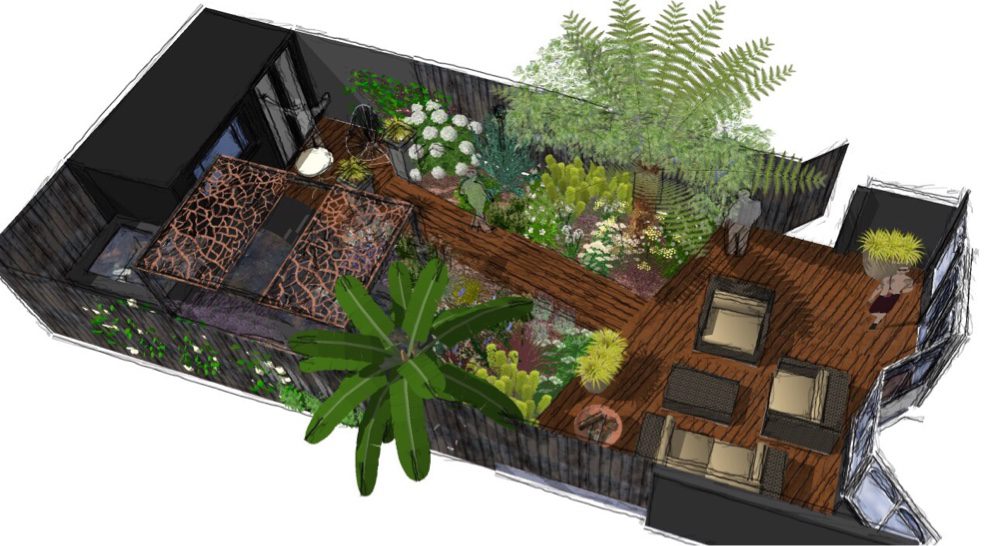 Panels of Perspex, next to the seating areas give a clean contemporary look

Simply twisting the angle of the decking gave the overall layout a very different look and feel. This enabled the area of decking closest to the house to be expanded, allowing for a more comfortable seating area. The shortest edge was next to the side gate, as well as the back door, so was then able to be left relatively free for easy access to the bottom of the garden. I proposed a lightweight concrete elliptical planter to be placed at the edge of the decking to tie in with the curved pond at the back of the space.

Planting in the space is a mixture of soft floral plants, as well as some architectural showstoppers. I also managed to sneak in some culinary surprises, as Anthony likes to cook. Suffice it to say Anthony is now totally into plants and keeps taking photographs to show me the ones he would like to include in the scheme.

The garden is now under construction and John and Anthony are very excited. If you are looking for a Leigh-on-Sea garden designer please get in touch. Please follow our garden design Facebook page for updates on its progress.