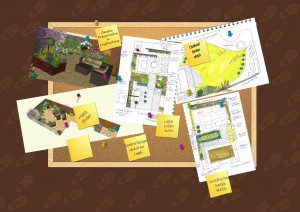 Katrina went to see a couple who want a Leigh on Sea garden designer. They had the garden re-landscaped a few years ago, but with the addition of a newborn baby, the garden wasn’t working for them anymore. With a new garden design they are looking to revive the space with some extra planting and the review of the gravel area. Katrina has asked them to consider revising their existing garden design in light of their new family needs.

Katrina’s next visit was a garden design in East London. The client has a small garden space at their East London terraced house and asked Katrina to design a wildlife friendly courtyard garden for them. The side return has to have storage areas, with the main area of the garden having raised railway sleeper beds planted with herbs. We are waiting to hear whether the client would like to proceed with the build.

Matt has started two new garden design builds this week in East London. The first was commissioned last year by a client who is a chef. Clearance and construction of the paving is now well underway.

The second garden is in Leytonstone, a small courtyard garden bounded by railway sleepers and raised beds. Large amounts of soil have been removed from the house so the construction can get underway.

Katrina went to see a couple who wanted a garden design in Westcliff. They have a large garden and are considering whether to install a swimming pool. With three boys they also want to retain enough space where they can play cricket and football.

Katrina went to see a couple in East London looking for a garden design on Friday. They have lived in the house for seven years now and have an active Springer Spaniel, as a result, the garden was looking tired and in need of some improvements. They wanted to create a space where they could dine, relax and entertain. They are planning some renovations to the back of the house and want to make the garden part of the modernisation. The client is a chef so the garden will need to include the facilities to cook, grow, as well as entertain.

Katrina was also called in to help a family out with a garden design in Walthamstow. The children have grown up so their garden needs have changed. They would like to have a space which allows the older son to maybe kick a ball around, but allow them some space to sit and relax in the sun. They were keen to get the project completed as soon as possible, but with Earth Designs’ current bookings, this was not feasible. Katrina drew out the concept plan for them and they may revisit the project next year.