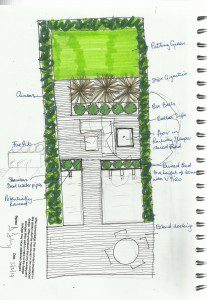 This client was looking for a London garden design company to help him think through a big water feature, in fact he wanted half his garden to be aquatic. He was happy with the existing decking adjoining the house and planned to make the most of the space at the end of the garden for a putting green. We focused our attentions on the middle section of the garden.

A huge sunken water feature, fed by pipes set into a raised bed, is crossed using a decked bridge leading to an L-shaped deck in the centre of the space. A rattan sofa positioned round a fire pit will provide a comfortable and elegant area to relax under the canopy of an Acer in a raised railway sleeper planter. A bold planting scheme was proposed, with simple Stipas and architectural Buxus giving the space a modern, no-nonsense vibe.

The design presented itself with challenges for the London garden design company as they would need to consider the level of works to create the huge water feature the client dreamed off as access was tricky. The best way was to try and reuse some of the soil in the propersed raised beds however a large amount would need to be cleared from site therefore making the project costly.