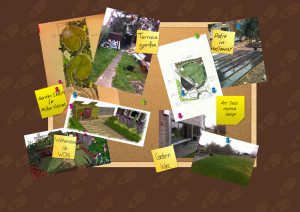 The team have continued the paving installation at our landscaping in North London site. The pathway is how virtually finished, with only pointing of the sett edging to do. Work has started on the first black limestone patio at the back of the space, but work was hindered by the fairly heavy rain later in the week. Hopefully things will be back on track next week.

We presented the garden design in Walthamstow this week. Both the back garden and front garden designs were received well by the client, and they have paid a holding deposit to secure our next available slot while we make some necessary changes to the design and quote/proposal of works. The height of the damp course in the new extension to the house has necessitated some significant changes to the finished ground level outside which means that the design needs to be tweaked for the adjoining section of the garden. Once the changes to the design and subsequent re-budget has been finalised, the client wishes to complete the work on the area directly adjoining the house asap, with the remainder of the garden scheduled in for later in the year.

Katrina went to visit a client looking for a garden designer in Hertfordshire. She had a house built a few years ago in a strong art deco style and has a garden which wraps round the entire property. The back garden access a crossed the entire width of the house,  is north facing and she was looking for some creative solutions to provide her with an attractive modern garden design. After spending a couple of hours with her, Katrina came up with a bold contemporary design featuring sweeping curves, borrowed views and pleached trees. We are waiting to hear back from her as to whether she would like to proceed with a design package.

Katrina also paid a visit to someone looking to get her garden design in Milton Keynes. She bought the property last year and was now turning her attentions to the garden. She wanted something she could build herself of with slight assistance from her dad, who is a builder. She rents rooms out within her house at the moment but plans to raised a family her in a few years, so it needs to be versatile in its use. Katrina produced a design based on spirals and allowing for reclaiming the extra area of side return to widen the area outside the back door. She included one of the sheds and also a summerhouse area at the bottom of the space.