See what we have been up to in our London Garden Design Studio this week: 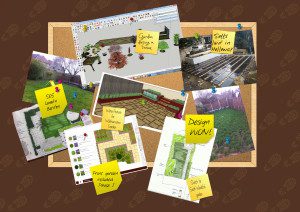 The garden builders in North London have been working against the changeable weather again this week to continue to install the various areas of sandstone and limestone paths and patios. The paving should be completed in the next week or so, then on to planting, lighting and other finishing touches.

We have been given the go ahead by the clients for the garden design and build in Walthamstow. Katrina met with them on Saturday and they were very keen, we just needed to finalise a few details. They originally asked us to complete only the area around the house in the first phase of the works, but after some discussions have decided to include a water feature in this area and have also commissioned the full build on their front garden in the first stage.

Katrina went to visit a client looking for a garden designer in South London. He has lived at the property for 10 years and had installed some decking bottom of the garden during refurbishments to the house when he first moved in. However he has never really liked layout of the garden and recently decided to get the entire space re-landscaped, potentially re-using the existing decked area. Katrina designed a low maintenance space for Mediterranean entertaining, with a series of platforms, including some decking and some paving. A large raised bed seating area, complete with brick built BBQ and pizza oven, and a sunken trampoline ensures that the space is suitable for use by all the family.

Katrina then went on to win a garden design in South Woodford. The client has recently bought the newly renovated property and has some issues with privacy from the neighbours. The client originally requested that Katrina simply come and quote for re-fencing and some new lawn, but during the meeting Katrina persuaded them that a design may deliver a more long term solution to their needs by creating a more cohesive space. Matt is due to complete the site survey this week – watch this space for the progress.

The garden design for Essex is being pushed through the studio at the moment. It has a Japanese planting scheme and some issues with the existing decking. Katrina needs to look at how re-building the existing steps to make them safer and more useable will impact on the rest of the space, while trying to remain within a tight budget – not very easy!

Katrina has also had some enquiries for her Google Sketch Up for garden designers course. There are 4 students wanting to go ahead with the course, dates are currently being booked for the coming months.