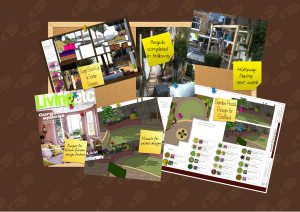 The garden build in Holloway continues. The team have built the timber structure, with just the table and benches to complete once the paving is down. Matt has finished constructing the raised bed and water feature wall, and applied a render scratch coat to both. He will do the top coat next and get them ready for painting.

Katrina has completed the garden design by post for the client in Stafford. The design was produced using information provided by the client through a questionnaire and site survey form which was emailed to them. We used the answers to the questionnaire to produce three sketches, from which the client chose their preferred design. Katrina then transferred the concept into a scale plan. The postal design package included a planting plan and list plus a couple of 3D visuals.

Living Etc are doing a feature on Urban Garden designers and would like Earth Designs to contribute. Katrina has sent them some images.

Katrina has one of her Google Sketch Up for Garden Designers short courses booked for the 21st and 22nd February. One place has already been taken by a practising garden designer who would to polish up their visual presentations and learn how to produce working designs using Sketch Up. There is one place still available, so if you are interested please let Katrina know.

A chap in America has contacted ED about completing one of the short garden design courses online. He is interested in the Google Sketch Up course for Garden Designers and wants to work with Katrina to tap into her creativity.

The garden design in Walthamstow is progressing with research being done in various Moroccan garden products which might be suitable. Once work on the back garden has been finalised, Katrina will then begin on the front which has a more traditional concept.