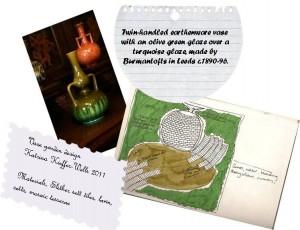 This garden design looks at the Garden Design Inspirations elements within this earthenware vase, such as surfaces bleeding from one space to another and reflects that in the choice of materials used within the garden. The concept would suit a low maintenance garden. Long arched lines of setts stretch diagonally across the garden entrance, bisecting a lawn. The setts are staggered to mimic the glaze on the vase and are built from Indian sandstone, ideally in a mint or green colour palette. The oval lawn gives a wide choice of options for the client. The sett detailing is again repeated in the opposing corner, on which the client could display a selection of pots, plant, garden ornaments, or other such items.

The main patio area to the rear of the garden is constructed with Indian sandstone setts laid concentric circles, to form a patio large enough to house a table and chairs for 8 people.

A large water feature, in the form of a giant funnel attached to a rendered brick wall adorned with a panel of rusted steel, forms the backdrop to the seating area. The funnel feeds down to a pool, which in turn feeds a rill, tiled in turquoise mosaic tesserae, running around the edge of the patio.

Planting in this garden focuse on leaf colour and interesting foliage, including blue grasses such as festuca glauca mixed with pachysandra to mimic the strong colours visible in the vase glaze.