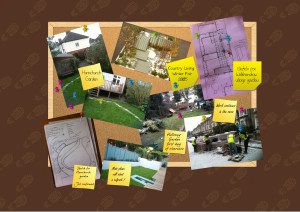 Matt has started work on his new landscape in Holloway this week. Although the site has the advantage of being spacious and level, the access is very poor and there is a large amount of concrete and other waste to remove. There is also a substantial quantity of materials to bring into the garden, all of which must be moved by hand down through a basement kitchen and up into the garden itself. On Friday the team attempted to work through a snow storm, shifting around 10 tons of sand, ballast and cement in 25kg bags (approx 400 bags!) until the steps into and out of the house became too slippery and dangerous and Matt decided to abandon site. We hope to finish clearance and start construction next week if the weather allows.

The client Katrina, our London Garden Designer went to see last week has confirmed that she would like to go ahead with the work. She was looking for a basic garden design in Hornchurch, really just to give her garden a bit of a facelift and inject some winter/spring interest. There is a large part of the garden which she wished to retain as lawn for her grandchildren to play on. As she isn’t a keen gardener herself she wants to ensure the plants are low maintenance and provide more interest than the existing plants, which are mostly shrubs with similar leaf colour and form. Katrina has designed a palette with more varied leaf colour and texture and added grasses to the mix. We have also suggested painting her existing pebble dashed garage Aubergine to add more colour.

Earth Designs has been approached to construct a show garden at the Country Living Spring Fair. We built a garden for them a long time ago, a few years after we started the company. However, due to the volume of work we have at the moment we have politely declined the show garden invitation.

Katrina is waiting to receive a completed garden postal design kit from a client. The client bought the voucher through one of the experience websites with whom we have partnerships, but wished to wait until they moved before redeeming it.

We have been contacted by the clients who own the garden ‘All Hands On Deck’, which can be found in our website portfolio. The garden in South Woodford was one of our first garden builds, but after ten years is starting to show its age and needs a bit of a freshen up. This garden design for entertaining featured a pool, dining area and raised beds. There is a little remedial work needed for one of the beds, plus a re-paint and some other wortk. Matt is due to go and visit them in the coming weeks.