Skip to content
Modern Family Garden Design – some ideas for how to get it right. 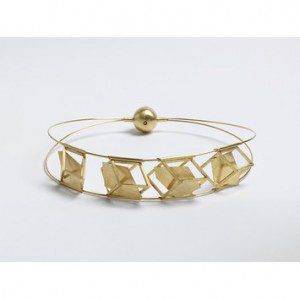 The Italian goldsmith Alberto Zorzi (born 1958) is one the Padua School, whose individual members are celebrated for their innovative use of gold and for sculptural forms of subtle minimalism. He has been both student and teacher at the influential Instituto Statale d’Arte Pietro Selvatico in Padua, and has subsequently taught in Milan and Florence. He is currently Professor of Goldsmithing at the Accademia di Belle Arti di Ravenna e di Bologna and exhibits extensively in Italy, Germany and Switzerland.
Geometry has a recurring fascination for him and has inspired much of his work. This necklace with its angled and interlocking shapes is part of a series titled ‘Structura’ which Zorzi has developed through the late 1990s and first decade of the 21st Century.

Rigid neckpiece of two gold wires which at the front support four three-dimensional box-like forms each with an angled geometric panel within. At the back the wires join and connect to a spherical clasp, the two halves of which fasten with an internal pin. 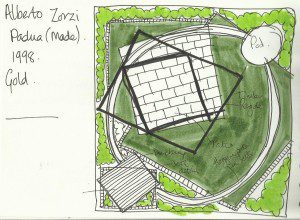 This garden inspired by Alberto Zorzis necklace at the Victoria and Albert Musuem draws inspiration. Fm the strong geometric lines to create a modern family garden design. Intersecting squares with detailing form the layout while a ring pathway links all the areas. A decking area direct.youtside the back door is off set with a sett square to mimick the necklace and form small planting pocket for herbs, reminiscent of a herb wheel. E pathway sweeps around the edges bisecting a law sandstone patio. Above it an open pergola offset against the patio beneath then houses a further off seet square. A large area of lawn opens out to the right of the space and is edged in setts. Laid to artificial grass to reduce maintenance and to allow for the motif to contain award ‘hard to mow’ pinch pockets.

The ring pathway leads to a pod at the bottom right of the space for an extra room in the garden and for a usable office space in a location where space is at a premium.