Robert Cannon from New York has contacted us about his crazy garden sculptures. He creates very organic shapes from ‘Terraforms’ which consist of strong weather resistant ferro-cement or riveted metal plate filled with soil and planted. 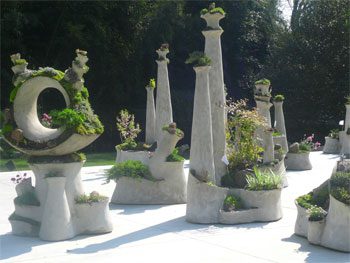 Most of the pieces have built-in irrigation systems and some are on wheels. Like gardens they grow and naturally change with the seasons, reflecting the passage of time, the qualities of their environment, and the devotion of their stewards. He has been sculpting with these materials for the past 10 years and shows his work regularly in and around the New York City area in high end stores, galleries, parks, and museums. 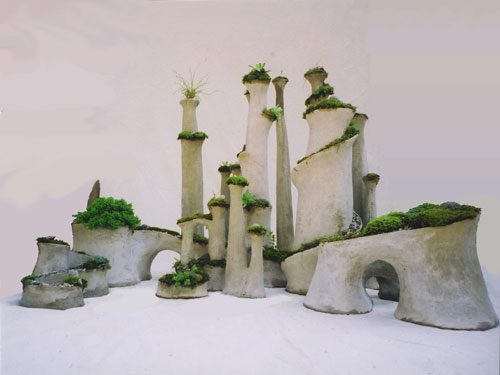 The following chat has been pasted from Robert Cannon’s website:

Terraform – v.t.  (literally, “Earth-shaping”) the process of deliberate modification of the atmosphere, temperature, ecology, etc, of a planet, moon, or other body in order to make it habitable to humans. from Wikepedia

Terraforms are sculptures built of man-made systems, earth, and plants. The concept of terraforming, stolen from the aerospace industry, is here brought to bear not on other worlds but on contemporary culture and consciousness.

In the technology driven civilized world, where artificial reality, plastic surgery, genetic engineering, and pharmaceutically altered personalities are becoming ubiquitous, Terraforms seek to present a conscious and direct experience of material nature.  In the world that reduces nature to something pleasant to visit on holidays, Terraforms remove the shutters from the view of nature as the grand and terrifying source of life and reality. In a society un-tethered from the mothership of history and the environment Terraforms explore the increasingly complex relationship of figure and landscape, text and context. Terraforms say No More Dead Objects.

The ruins, myths, and personae of the ancient world as well as the more recently over-grown farms, abandoned factories, reservoirs, canals, tunnels, mills, ramping highways, and second growth forests, all set against the glacial terranes, heaving tectonic plates, eroding shores, and shifting seasons of the Earth serve as inspirations for these works.  These are the footprints of the dance between culture and nature.  They reveal the evolving yet cyclic story of human rising up and submission to nature, our will to free ourselves from her harsh laws, all the while working with nothing but.