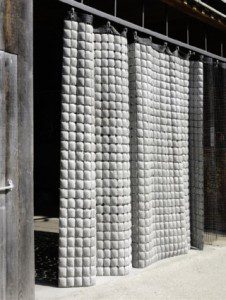 Now this is definitely something I would love to include in a garden design. It would really suit a garden with an Outdoor Room theme, which is one that I often like to re-create.

The concrete curtain, featured on blogs worldwide, was developed by Austrian construction company Oberhauser Schedler. This curtain reminds me of a series of ice cube bags, and I like to think that it was created in a similar manner. It also reminds me very much of Turner Prize winner, Rachel Whiteread, who creates casts of ‘negative spaces.’

I will definitely commit this idea to memory and if ever we have a project with a large scope and a daring client, it maybe something we can pursue.