The clients had lived in the house for a few years, and had undertaken considerable refurbishment on the interior of the property. They had a large family garden which needed to accommodate two children and a very active black Labrador. A block of flats had recently been built next door, leaving the clients feeling very exposed. They wanted to break the garden up into a series of smaller areas in order to create a more dynamic space. 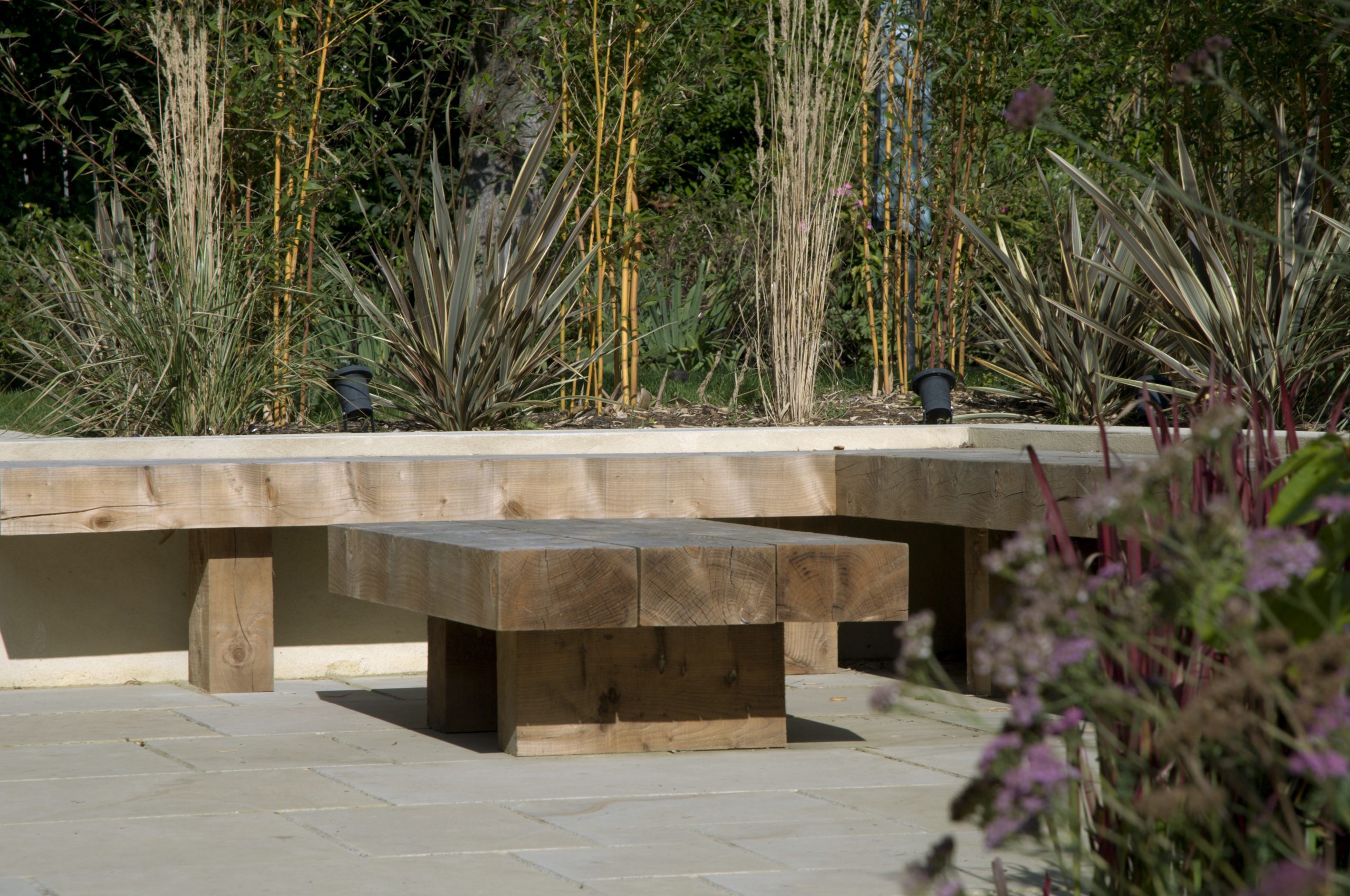 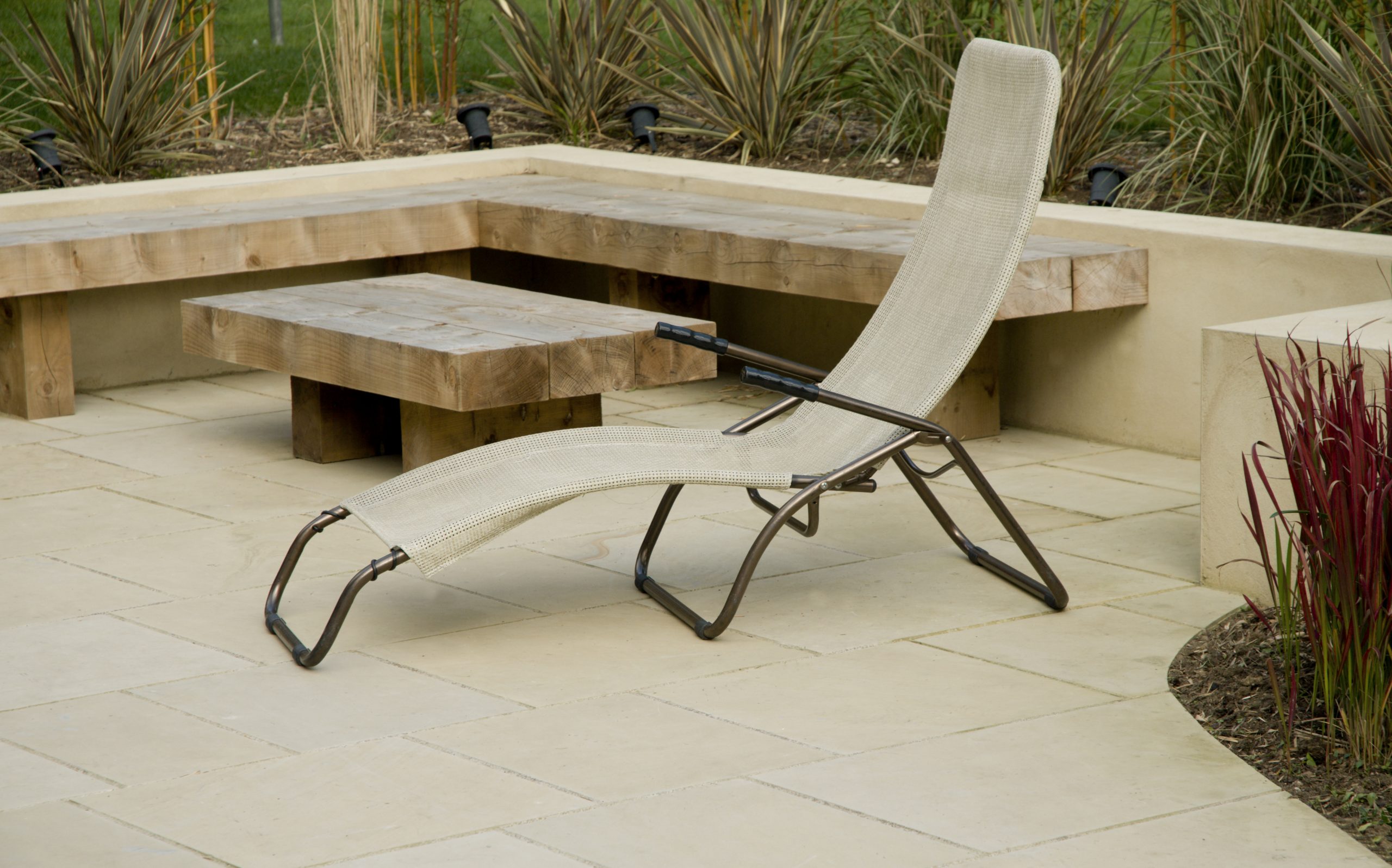 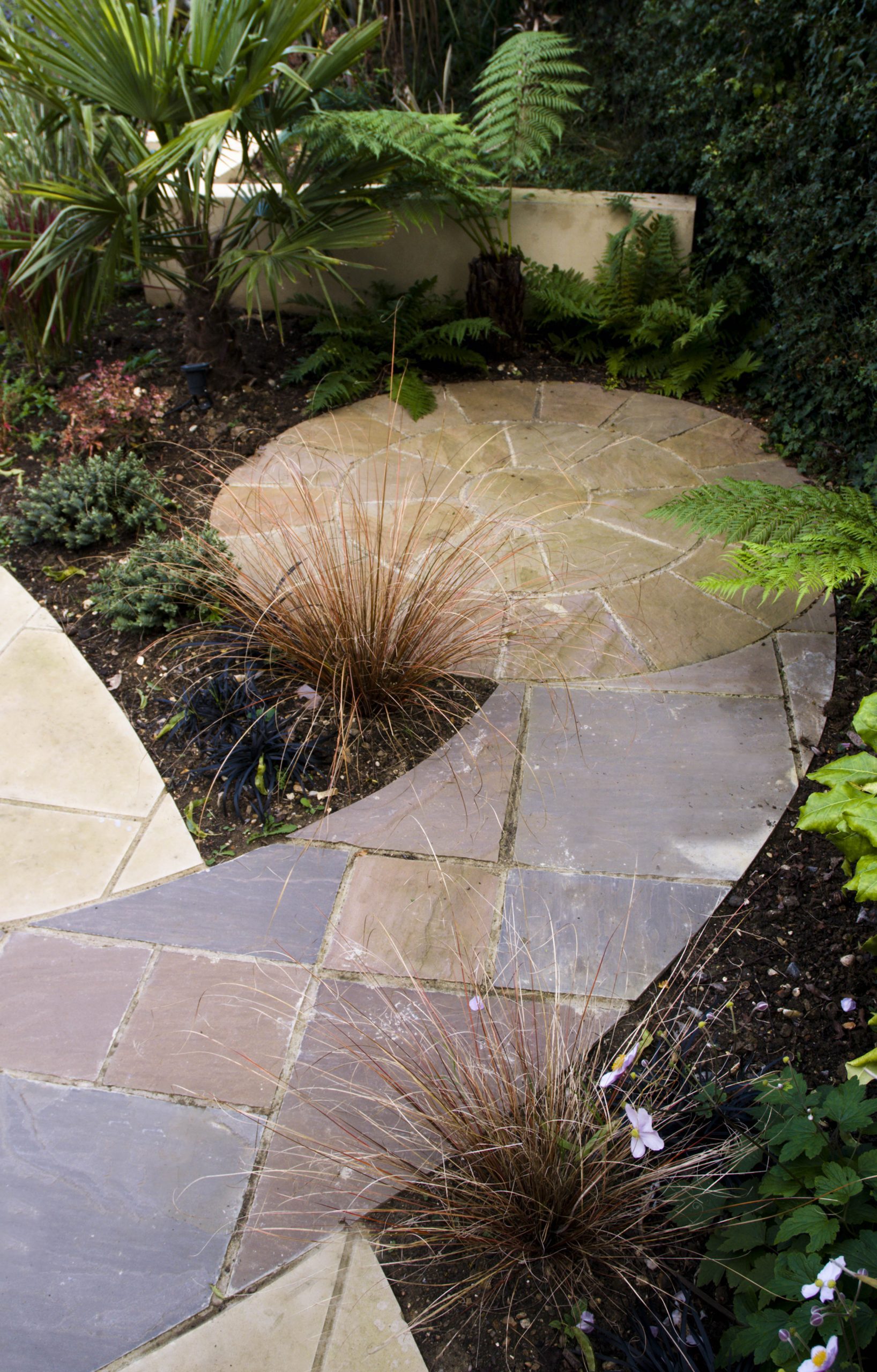 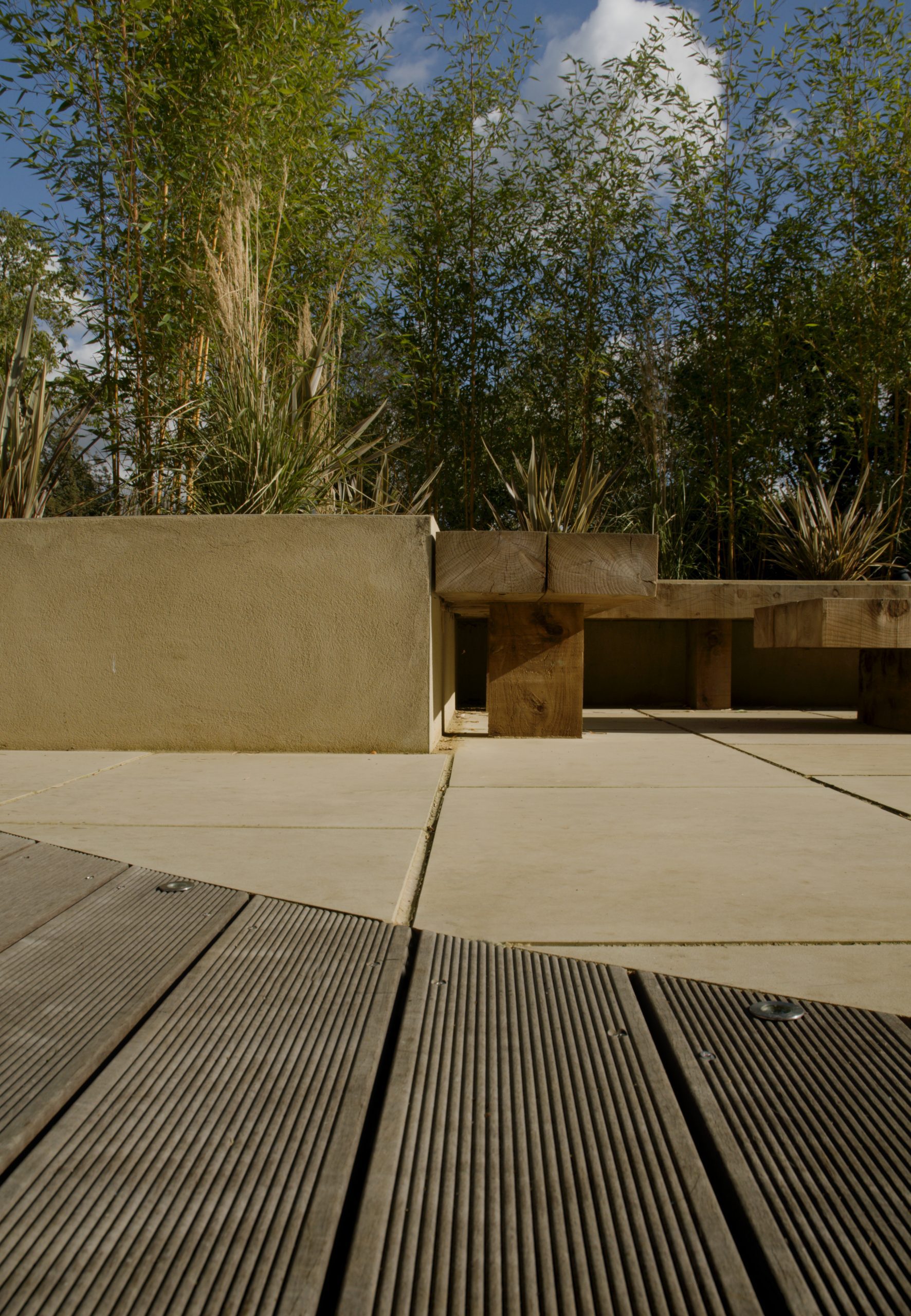 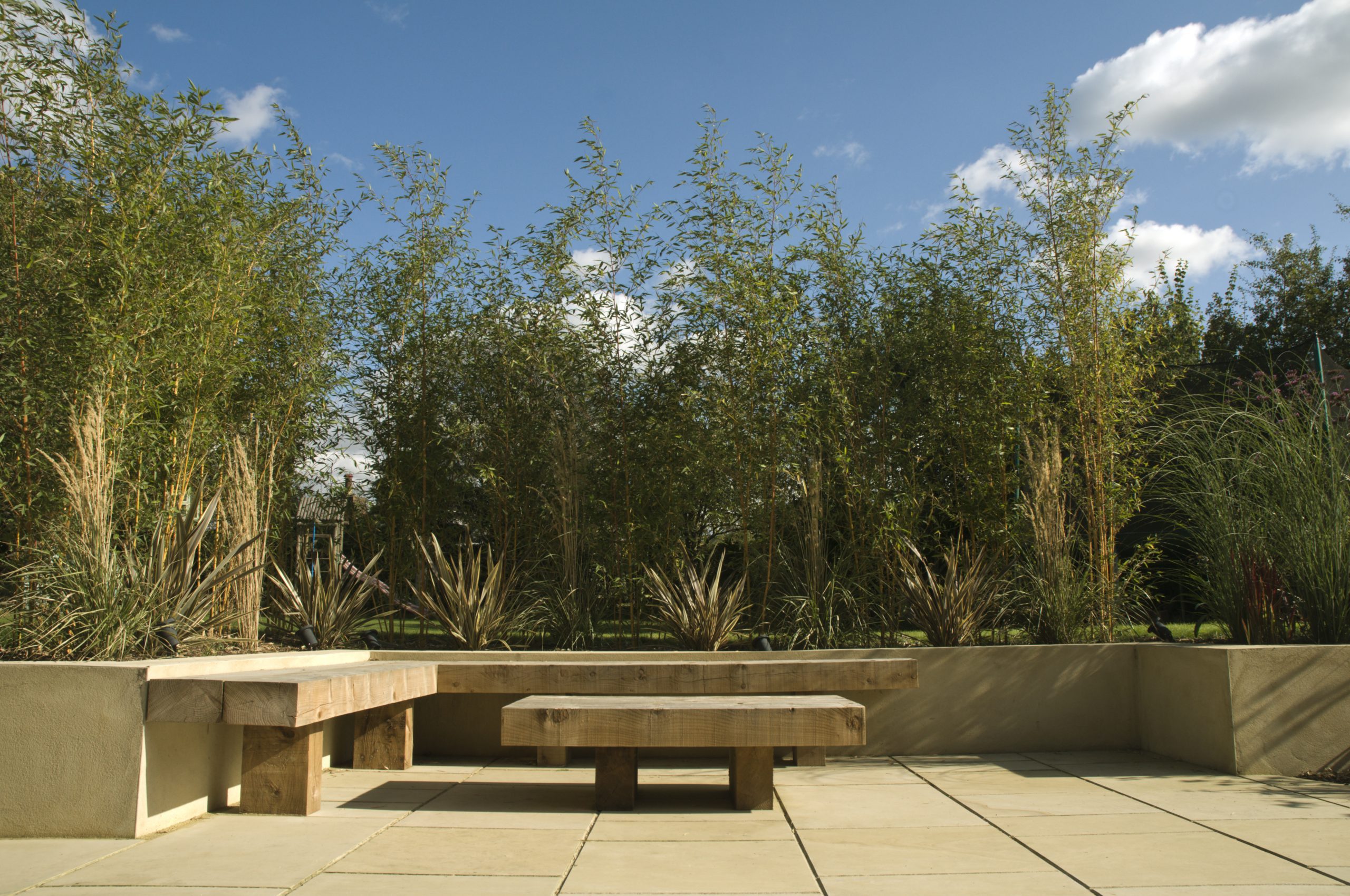 The clients had an existing block wall that retained the second upper level of the garden. Costly and difficult to remove, we decided to make a feature of this wall by rendering it to allow it to be painted to a colour of the clients’ choosing. The client also had an extremely large area of paving outside the back door, which was larger that actually required, so the design broke this space up using soft organic curves and spirals that bisected each other in large sweeps across the space.

We also broke the large area of hard landscaping up by using three different types of material to create interest – two types of sandstone paving for the area directly outside the patio doors with a broad section of mint fossil sandstone sweeping from the integrated seating area wrapping around the side of the house. We used the existing wall and extended it further back to create an opportunity to include some railway sleeper seats and table. Planting in the space consisted of strong architectural plants interspersed with feathery grasses nestling alongside long flowering perennials.

“ Everyone has watched enough television to know that some garden designers pursue their own vision at the expense of what their client wants. A truly talented designer listens to their clients’ vision and is able to marry this with their own inspiration and flair. Earth Designs fall squarely into this latter category. Within a couple of hours of meeting us, Katrina had sketched the first draft of her final design; over the next few days she refined this, and transformed our half-baked idea into a beautiful, practical and elegant garden.

We are absolutely delighted with the design and finish. We would thoroughly recommend Earth Designs to anyone; whatever your budget or the scale of your garden. ”