The space was formerly a double garage nestled between two houses. The roof had been removed, leaving behind a worn concrete and cobble floor, garage doors, and two rusted steel girders crossing the space. In creative terms, the brief was fairly open: to design a clean and contemporary space, suitable for entertaining yet functional enough to accommodate off-street parking for a family car. 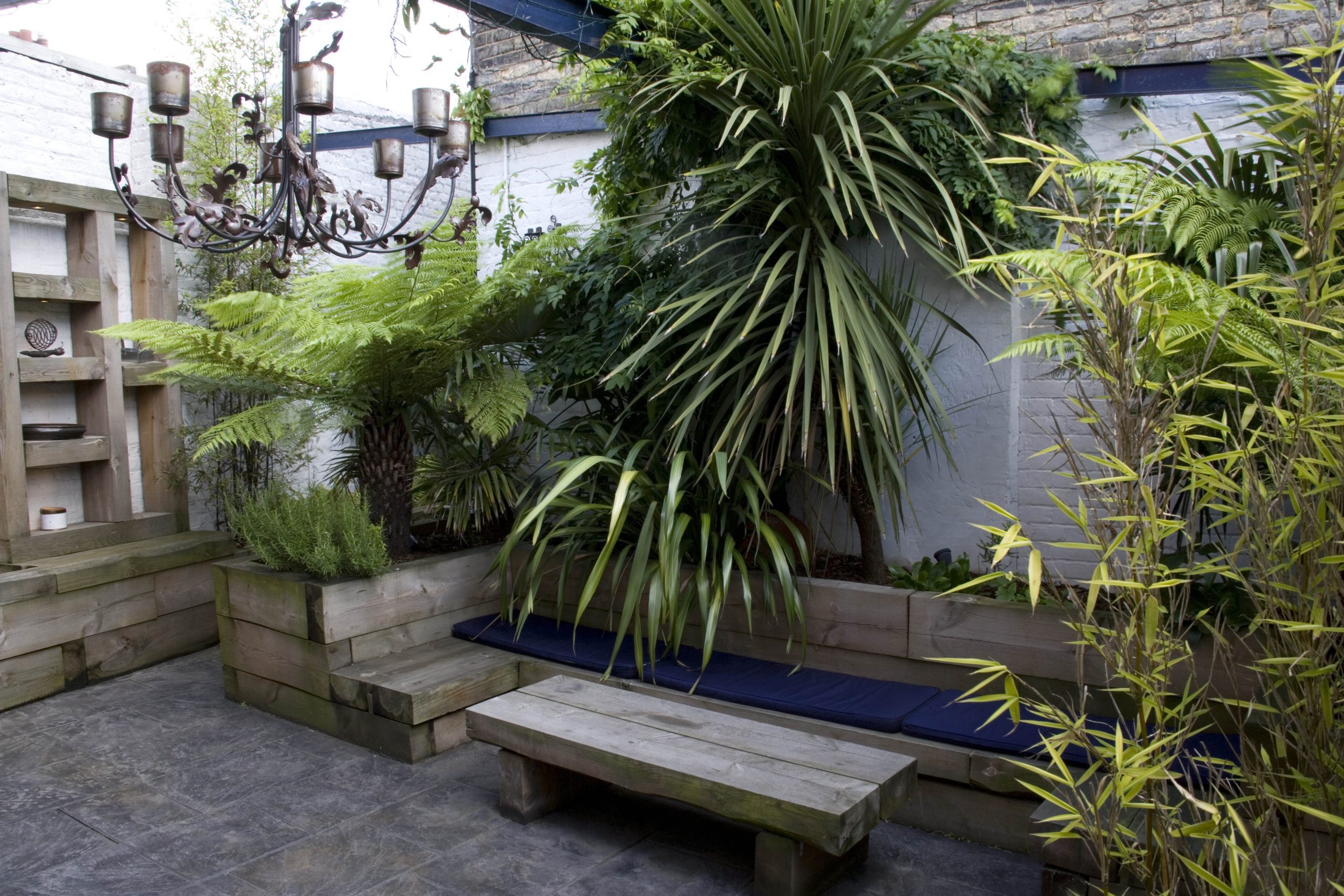 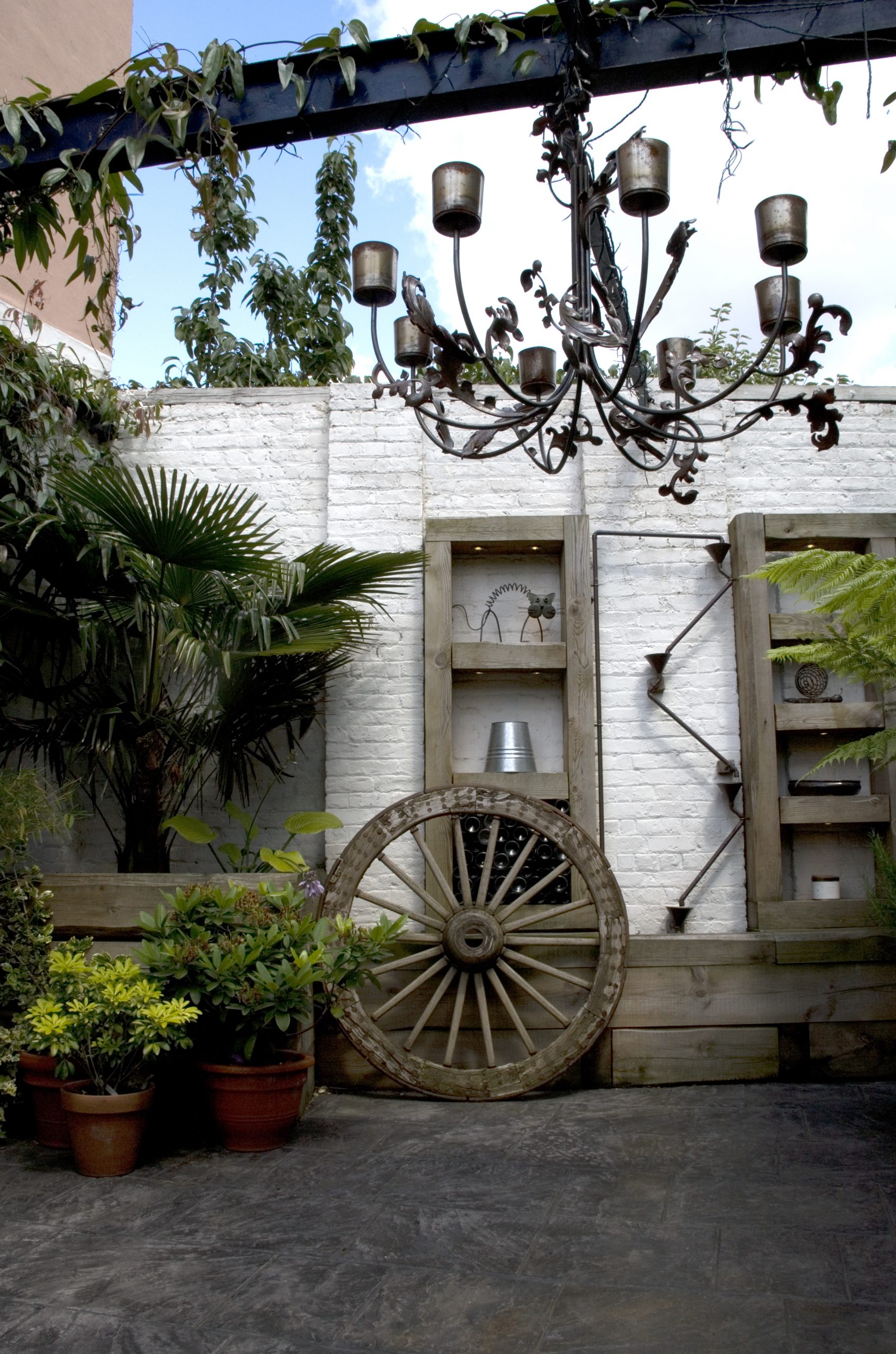 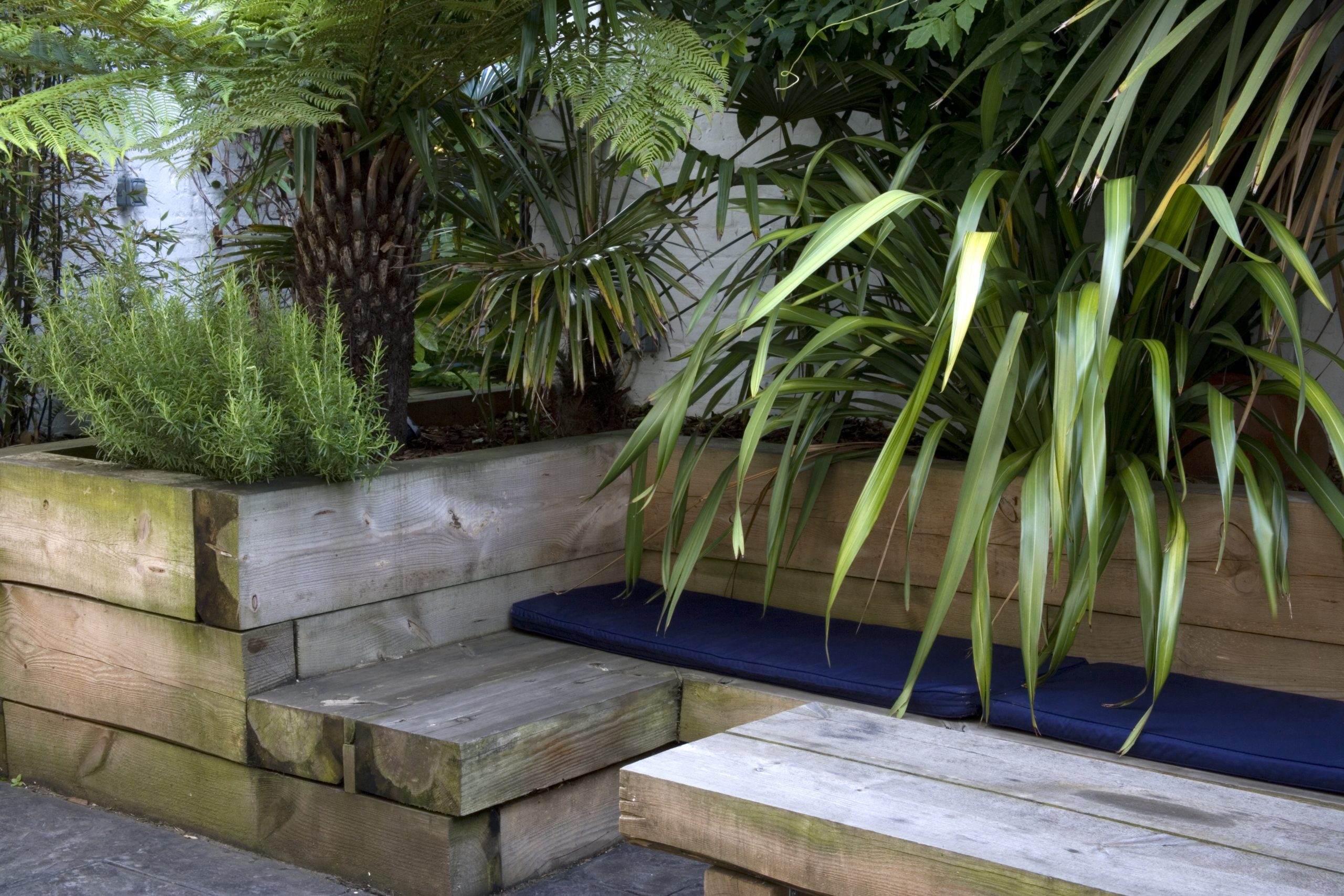 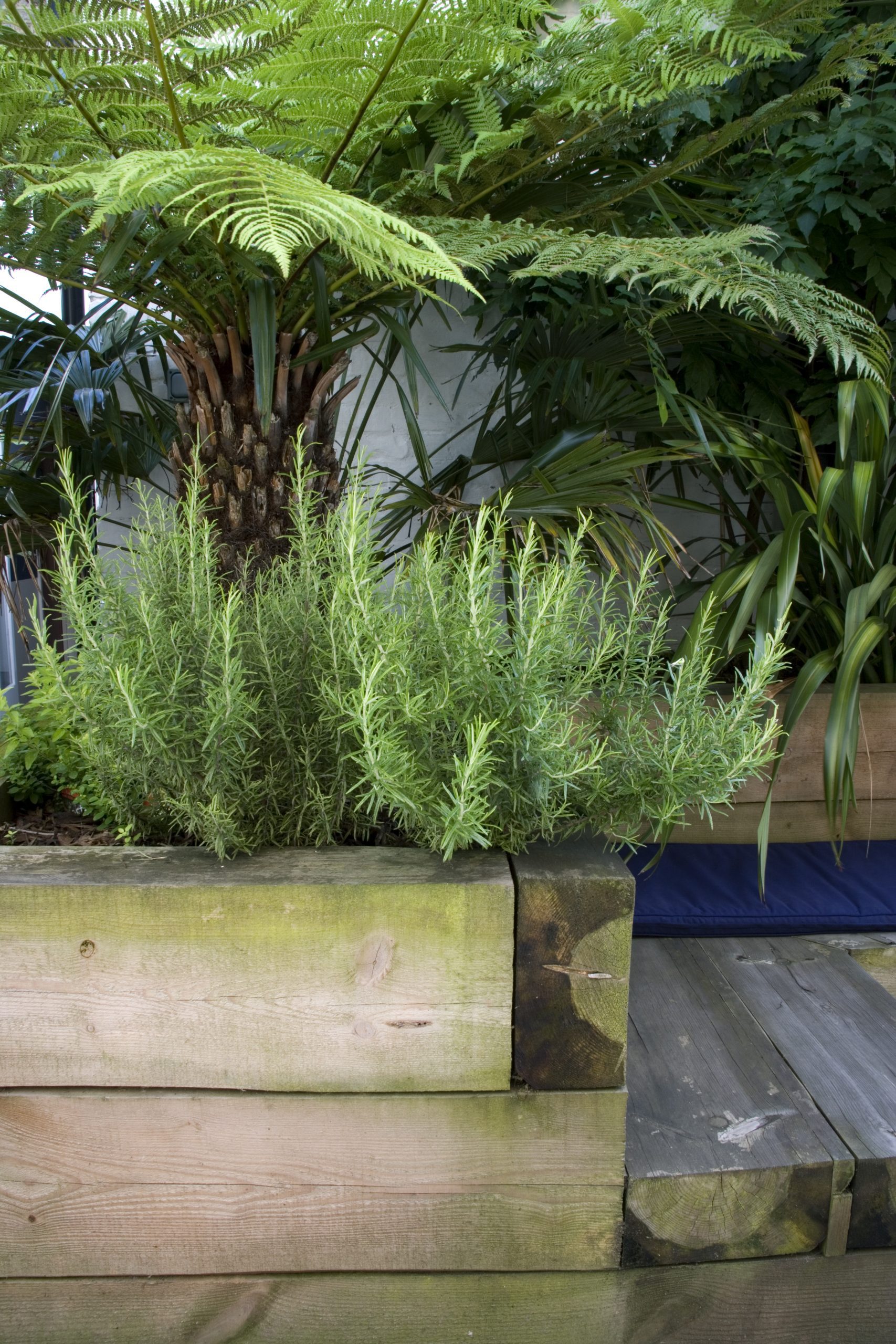 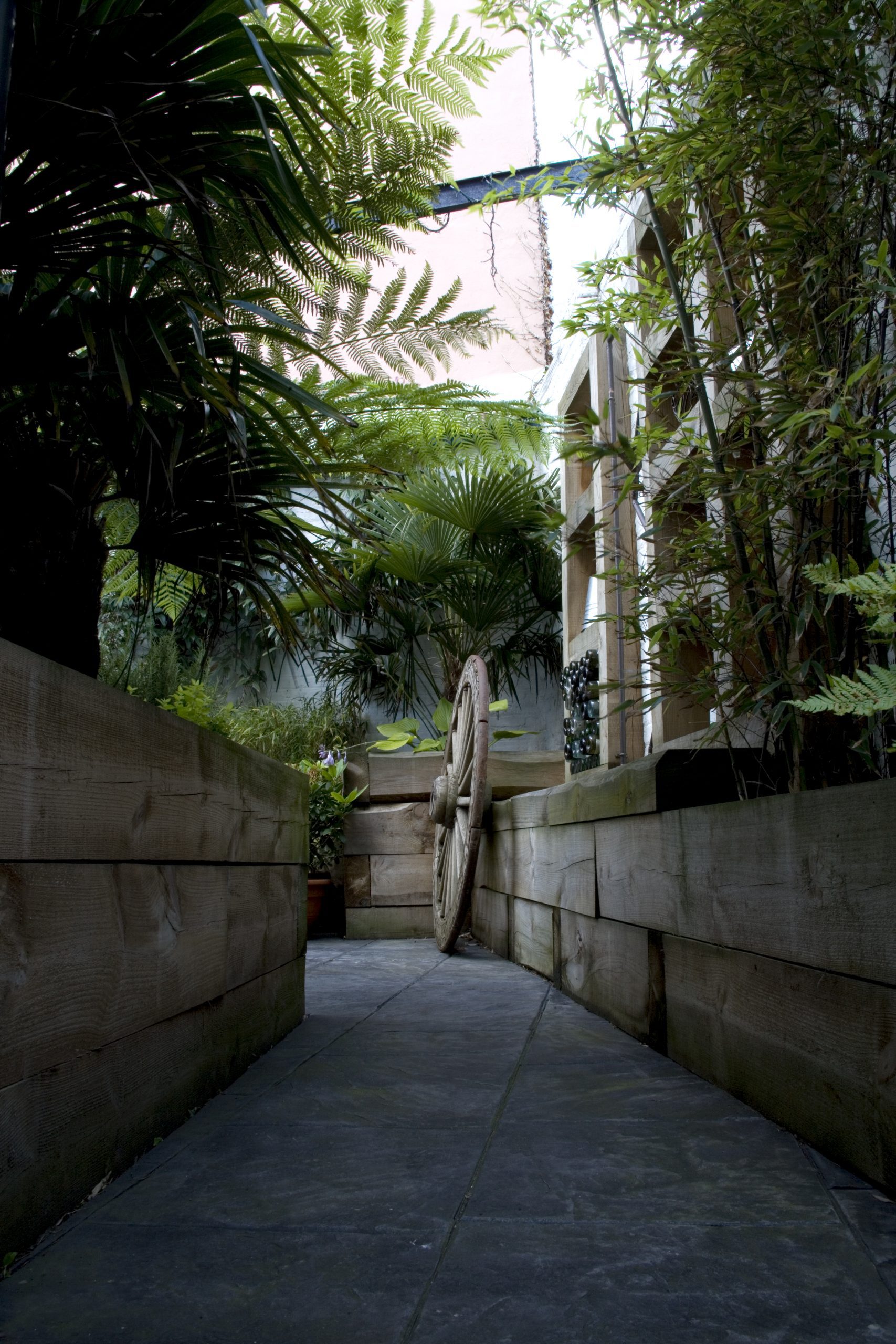 The design was inspired by the strong sense of enclosure to the space, taking elements of a typical lounge to create something that was very much an exterior room. New railway sleepers, chosen for their clean look and contemporary feel, featured heavily as a construction material.

These were used to create raised beds around the boundaries, an integrated ‘sofa’ and coffee table, and a dresser-style shelving unit down one side of the space. Judicious lighting within the beds and shelving units served to create ambient lighting similar to that found in a well-planned drawing room.

The ‘living room’ theme was further enhanced by the inclusion of a bespoke wrought iron chandelier hanging from the cross-point of the girders. To allow for off-street parking, the existing garage doors were replaced with two large bespoke wooden gates, and pattern-imprinted concrete was laid to provide attractive and durable flooring. Planting was used to blur the linear appearance of the space, with architectural, spiky evergreens and lush, leafy climbers taking pride of place. A water feature constructed from a Heath Robinson-esque series of copper piping and funnels provided the finishing touch to the garden.

“ The phrase ‘making a silk purse from a sow’s ear’ comes to mind! What we had grown used to fondly referring to as ‘The Prison Yard’ is now a tropical oasis that gets more use than any other “room” in the house. Katrina and her team interpreted our brief perfectly and delivered, through wind, rain, and on one notable occasion a violent thunderstorm, our perfect garden. We can’t thank them enough for what is, as one old chap commented in passing, ‘The most remarkable transformation I have ever seen’. Thank you. We love it! ”