Skip to content
Seeking out unusual places to visit in East London. A winged kitten to Kylie Minogue poo

I love nothing more than visiting unusual places to visit in East London places to gather in design ideas. And there was none more so than this truly absurd venue I spent a couple of hours in the last week in Hackney. Everything from the winged kitten to Kylie Minogue’s poo. The home of Viktor Wynd, a self proclaimed dandy, artist and impresario of The Last Tuesday Society. He is a connoisseur of the macabre. This is not just a collection of natural history, of cult, erotica, exotic skeletons, shrunken heads and unicorns. It is a celebration of the strange and the wonderful

Not that unusual from the outside 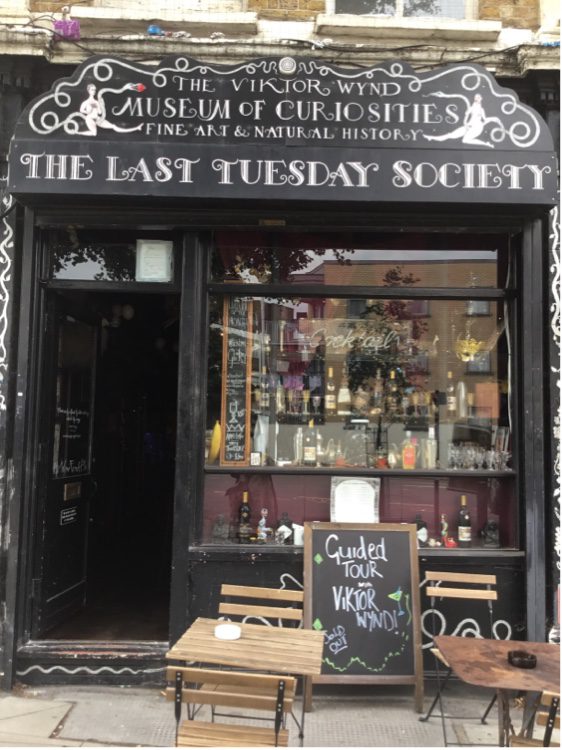 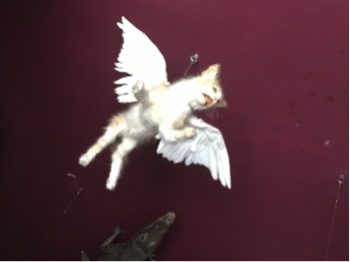 However the moment you step inside this unusual East London venue, you realise this is no ordinary bar. Painted in a deep 70s inspired gloss, the space is dimly lit and adorned across the ceiling with what at first glance appear to be 20 or more examples of Victorian taxidermy and skeletons. However, you quickly realise that the creatures on display are a bit unusual – a white kitten with feathered wings, a human skull on what appears to be a seal’s skeleton, a crocodile with arms. All is not what it seems. 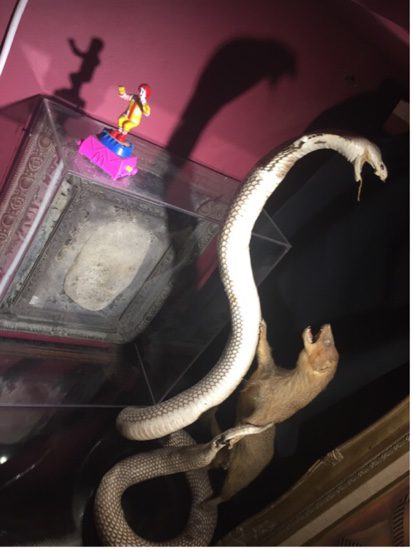 The upstairs gives you a flavour of what’s to come. The museum itself is in the basement. Accessed by a spiral staircase, the first cabinet you encounter comprises a plastic statue of Ronald Macdonald, a viper and stoat in battle, and a framed ghostly shroud. A mannequin greets you at the foot of the stairs. Looks quite normal apart from the enlarged breasts. A huge series of glass display cabinets fill the basement. Each is stuffed with the most absurd collection of objects, through which Wynd tries to “Shine a light on the unloved to show its beauty.” These are not just inanimate objects – he believes every object has its own story.

Flies go to see the Beatles 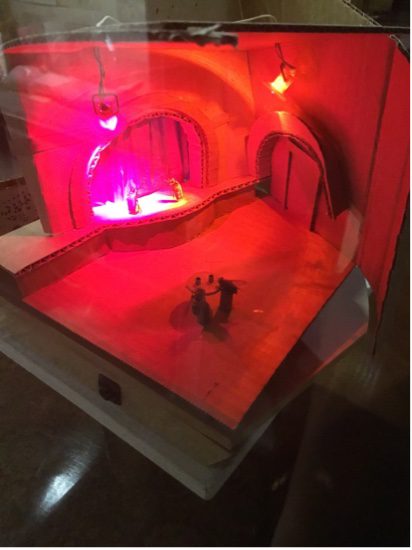 Viktor Wynd gives attention to the grotesque. The space is reminiscent of the ‘Cabinets of Curiousity’ of the 17th century where the fashion began for encyclopaedic collections of objects whose categorical boundaries had yet to be defined. The taboo nature of the items makes it interesting. It’s a collection of things that no one else would collect. Small vignettes appear throughout the space, which wizz into life at the push of a button. The scenes are comic and bizarre, such as a crowd of flies and wasps at a Beatles concert. 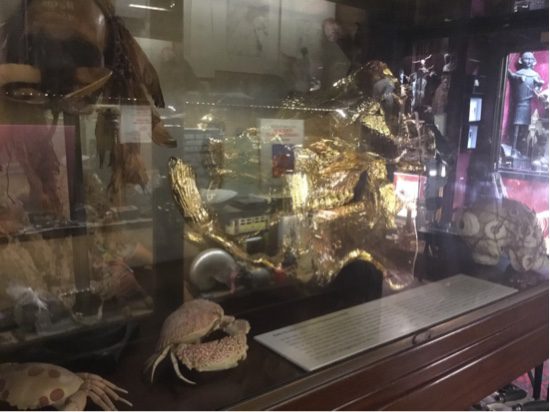 A huge cabinet contains a gold plated skull of a hippopotamus, believed to have been owned by the Colombian drug lord Pablo Escobar, who imported many exotic animals into Columbia, including elephants, giraffes and hippos. This Hippo (one of 4) was destined for the zoo on his ranch, but died in transit. Paolo Escobar had its bones goldplated. The hippos continue to thrive in Columbia and the cartel leader’s ranch is now a theme park, complete with hotels and zoo. 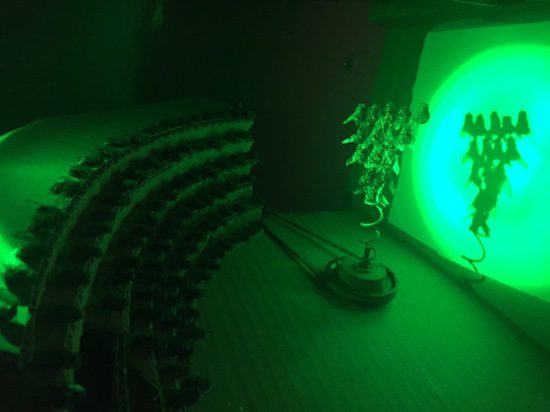 In one corner, there is a area that appeals to me like a snug in a Victorian pub. A macabre skeletal chandelier hangs from the ceiling, and a series of bottles, antlers and horns as well as the wood burner complete the space. Mannequin heads of Hitler are casually placed in the top cabinet, while a further vignette of a fly police display team to entertain their colleagues with shadow impressions lightens the mood. Many of the books laid out for display are very much “of the day”. As stand alone items they are very amusing. 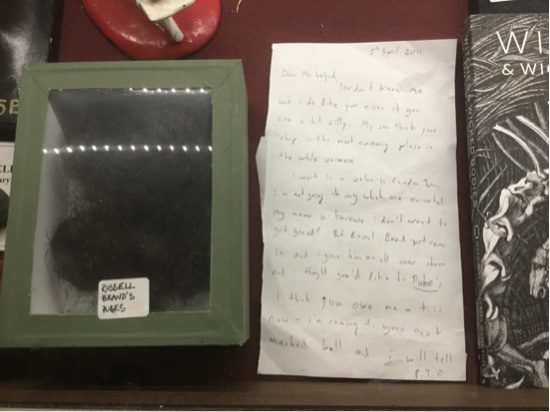 Another case full of natural history wonderment, a giant crab, shrunken heads and wierd birds. People send Wynd items. One box is purported to contain Russell Brand’s pubic hair cubes. There are cases upon cases of butterflies, bolts, insects and spiders filling the walls. Towards the end of the basement is a large table with a coffin as a centrepiece at the back of which is an eerily lit skeleton over what I think is a gorilla locked behind bars. On the ceiling, a mummified Merman looks down on the whole scene. 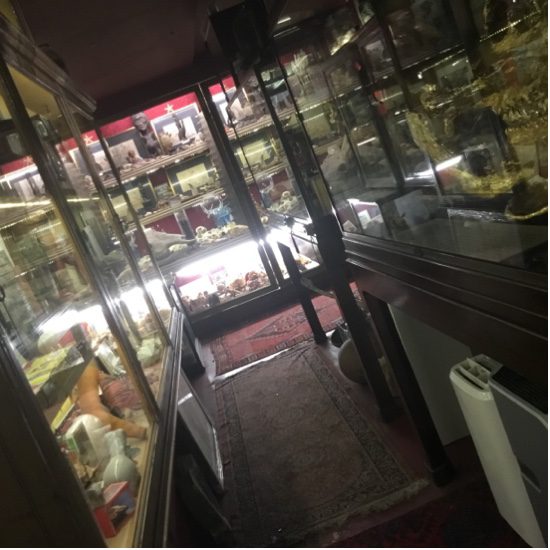 This whole place is truly unique. It has a real feeling of a bygone age. It reminds me of something you would find in Diagon Alley in the Harry Potter stories, with the kookyness of a set from the BBC series Sherlock. Everywhere you turn there is something to make you smile or to freak you out. There is a whole cabinet full of celebrity poo, including some from Kylie Minogue and Amy Winehouse. Just when you think you’re back in the Museum of yesteryear that you visited as a child, the traditional board of pinned moths to the board, a copy of an Enid Blyton story or a toy gremlin will pop out and make you smile.