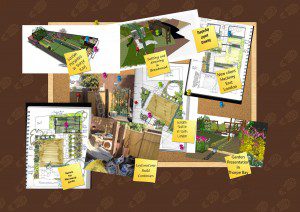 The Earth Designs team had a busy week.

Katrina visited a client who are looking for a garden design in Eltham in South East London.

The couple have completed some extensive rennovation works to the property and are now turning their attention their garden. They would like to install a garden office come man cave, at the bottom of the garden which would run the width of the space. Katrina designed an angular layout which included a patio and two large planters as well as a large area of lawn and a deep bed which would house their existing trampoline.

Gabion columns were to be featured in the space which will be filled with a selection of materials including perspex in powder blue, pinecones, crockery, cobbles and old bottles.

Katrina also visited a family who were looking for a garden designer in East London. They had recently completed some refurbishment to their basement which included bi fold doors leading out into the garden. They wanted their garden to look like ordered chaos and really like cottage garden style planting. The family would like to design the garden in separate areas allowing the back end of the garden to be given over to the teenage girls. The design that Katrina came up with features a series of interlocking rectangular blocks, patio, decking, box hedges as well as raised beds. A dogleg path runs down the length of the garden bisecting artificial lawn. At intervals down this pathway large heavy timber archways punctuate the space fixed with a panel of perspex creating lenses and interest and an element of space. The couple commissioned a design package there and then. Matt will return this week to conduct a survey.

Katrina went to see a client looking for garden design in East London. They had lived in the property for several years and it was slightly complex in that the interior was much higher than the garden level.

They have a young son and are keen to make an area which is safe and accessible for him to play. The existing decking would need to be replaced but with a similar style to the existing layout.

Katrina suggested moving the shed to the back corner to free up the sun in part of the garden. An area towards the back right of the garden will be created for this and a timber pergola framework will be placed at the top of the artificial lawn. This will allow the client to hang a magnitude of apparatus on such as swings, hammocks etc as well as draping sheets or other fabric around the edge to create a den.

Matt has been to a site survey for the garden design client in Brentwood They are looking for a space to relax and show off their newly built orangery.

Katrina also presented two garden designs on Friday and Sunday evening, both clients are very interested in the projects and are taking a few days to think about it before hopefully commissioning a build.