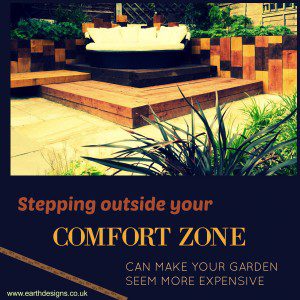 Having a garden designed by a designer can often save you money, as having done this for over 15 years I know which items cost more money and also which features we have added into gardens that really pack a punch without making too big a dent in your wallet. I often think that if you step outside of your comfort zone and add a feature, material or item that you wouldn’t normally have considered, or is ordinarily part of that additional garden, you can really up the ante. Adding in these ideas often make your garden see more expensive certainly demonstrating that you may have researched gardens thoroughly, and also even employed the services of a garden designer to assist you in the layout and planning of the space. Challenge yourself with colour for example, use the luxiourious dark greys and blacks for your fences rather than traditional browns or greens. Plant one plant in great big drifts rather than one or two of a lot of different plants, this adds a real designers twist to any space. Planting one of each things makes a garden very busy and makes it difficult to create rhythm and style. Tempting I know, but try and avoid, especially in small gardens. Create levels where possible, it adds journey to the space and makes it more interesting and exciting for the end user. Add vertical lines, an archway, a trellis in an interesting material or a feature wall which will take the eye skyward. The garden is somewhere where you can be whimsical, try out new things, let your imagination run a little bit ahead of itself. The end results will pay dividends.