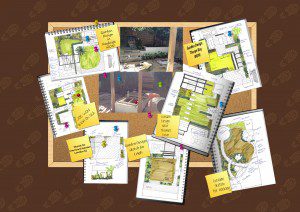 The first consultation Katrina went to see this week was a front garden in Leigh on Sea. The client bought the property three years ago and have spent time doing up the inside of the property. The garden was tired and awkwardly laid out. It is currently split into two levels so the client’s wanted to create a second seating area at the back of the garden.

Katrina’s second client visit was looking at a garden design in Rayleigh. The garden hadn’t been touched since the couple had moved in. The design has different zones for relaxing, one for dining, plus an area for the dogs to play in. The clients commissioned a garden design package the next day.

The next couple were looking for a garden design in Thorpe Bay. The client who are in their late 50’s, have lived in the house for a number of years and raised a family there. The garden isn’t working for them anymore so are looking to create a new area which will include seating as well as accommodate a garden office space. They commissioned a garden design package there and then.

Katrina then went to see a garden design in Rayleigh on Saturday. The client has a huge garden which is laid to lawn since having it cleared. They have four fruit trees, two of which are dead and need removing. The patio was disproportionately smaller to the rest of the garden. Katrina divided the garden in half with the front half being an oval shaped lawn, to be used by adults, the rear of the garden to be used by the children and to include a climbing frame, wigwam and an additiona area of lawn.