This Urban Garden Design looks at the elements contained within this 21400mm chair by Nendo (Oki Sato). Its translucent and repetitive qualities lend itself to an urban garden design, with striking lines that are both bold and calming. 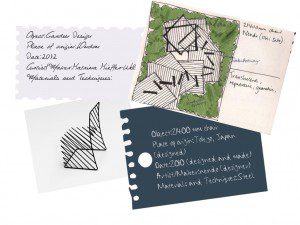 The design utilises this feature as its main theme, with a repetition of decking platforms stretching across the space. The platforms would be installed at different angles to arc into the centre of the space and positioned to provide an area large enough to house a table and chairs and yet still retain the original concept.

A series of wooden archways mark a suggested route for the user to travel through the space. However this is by no means the only route, as the construction also encourages a person to walk under and around the platforms, and in doing so constantly change their orientation within the garden. Great for a children’s garden, these archways can also be utilised to provide a framework for play equipment or a support for some fabric to be hung over to create a den.

A central water feature spouting a small jet can be viewed from a 360degree angle, which means that it becomes the focal point for the entire garden. The series of platforms culminates under a double square pergola, offset to mimic the disjointed quality of the chair. This pergola offers a grand finale to the garden and could be lit in such a way as to provide real drama to the space once the sun goes down.