This client has a long thin urban garden and wants to make it seem wider than it is at present. The garden has already been cleared, with the exception of some concrete adjoining the house. They do not have a huge budget so will be looking to self-build wherever possible. They have a modicum of construction knowledge and experience, but are looking for urban garden design ideas that will be relatively easy to implement and that will help to impart a sense of greater width to the space.

Katrina suggested using circles and curves to create the optical illusion of width. Through a series of circle motifs the garden will be divided into smaller sections, which paradoxically often has the effect of making a garden seem larger than it actually is.

A self-binding aggregate pathway forks from the back door. The right-hand fork leads to a circular area large enough for a table and four chairs. As the garden is south facing, we suggested including a shade sail supported by timber posts or landscape poles. To create privacy and intimacy, we suggested the client can install stainless steel mesh around the edge of the circle, supported by timber posts, to create height and interest. Over time climbers can be trained to grow up the mesh, to create the appearance of a room in the garden. 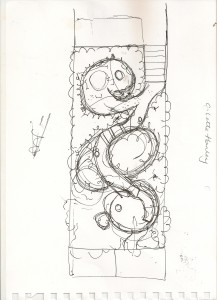 The aggregate pathway would continue down the garden, over which three timber arches could be constructed. The path would curve round an ellipse of gravel, which could be used to display pots, statues, or even include a hot tub at a later date should they so desire. Both paths and gravel would be retained by Everedge metal edging system or similar, which is both cost effective and simple to install. The pathway would continue down to the bottom of the garden where it ends in an Indian sandstone circle patio. If the client’s budget and skills allow, this patio could also feature a curved bench seat, constructed from brick or rendered blockwork. Alternatively, the client could install off-the-shelf garden furniture.

Planting in the space will be kept to small evergreen shrubs interspersed with long flowering herbaceous perennials, to offer maximum year-round interest. At a later date, the client could also include lighting. As the garden is small and close to the house, ambient light from the interior of the house can be expected to illuminate the garden. Therefore it makes the most sense to use accent lighting, such as fairy lights, decking light and one or two well-placed spotlights.

If you are struggling with a design of your garden and would like some advice, feel free to contact Earth Designs with a photograph and short description and we will try to respond to you with a concept.