Skip to content
Urban garden design – we find the answers. 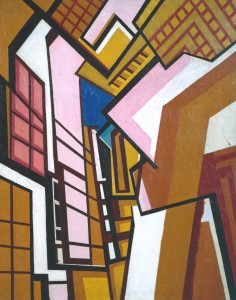 Vorticism was a short-lived but radical movement that emerged in London immediately before the First World War. ‘The vortex is the point of maximum energy’, wrote the American poet Ezra Pound, who co-founded the Vorticist journal Blast with Wyndham Lewis in June 1914. The journal opened with the ‘Blast’ and ‘Bless’ manifestos, which celebrate the machine age and Britain as the first industrialised nation. Lewis’s painting Workshop epitomises Vorticism’s aims, using sharp angles and shifting diagonals to suggest the geometry of modern buildings. Its harsh colours and lines echo the discordant vitality of the modern city in an ‘attack on traditional harmony’. The group’s aggressive rhetoric, angular style and focus on the energy of modern life linked it to Italian Futurism, though it did not share the latter’s emphasis on speed and dynamism. Artists associated with Vorticism included William Roberts, Edward Wadsworth, Henri Gaudier-Brzeska, CRW Nevinson and David Bomberg. The First World War demonstrated the devastating reality of pitting men against machines and Lewis’s attempts to revive the movement in 1919 came to nothing. 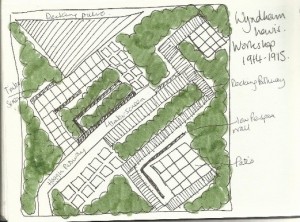 This design based on Workshop by Wyndham Lewis looks at a garden design involved a lot of materials. ideal for a Urban garden design Screens for the dramatic verticals throughout the space while several inter connect pathways guide the route through the garden. Stepping stones through planted beds help with ease of access through the space as well as echoing the strong geometric shapes in the artwork. Decking pathways and timber screens zone the garden into areas allowing the user to tackle any issues of privacy and divide the space up I to smaller compare nets. The design is quite frenetic, busy, taking the user through the space at a pace with little time to stop in any one area.