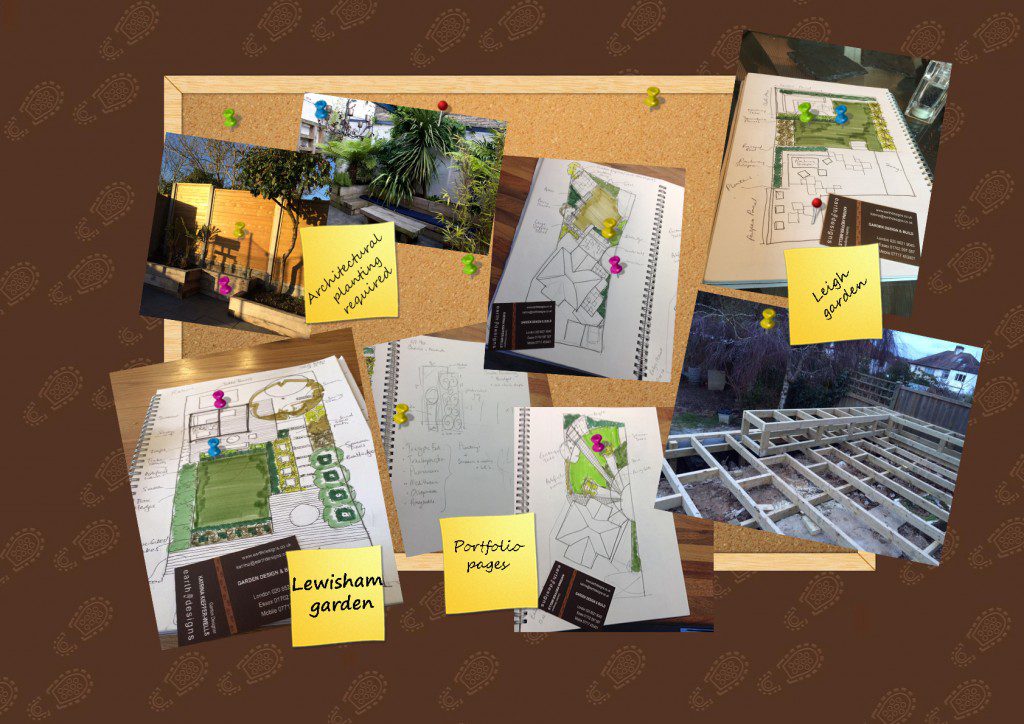 The first was for a gentleman in Hockley. He was looking for a garden designer in Essex and had contacted Katrina last year to help him develop his garden. He had postponed things whilst he got his planning permission through for the development of the house and was now ready to revisit some garden ideas. Katrina drew three sketches for him and let him decide which one he prefers to take to the design stage. He opted for the square base design which tied in with the existing pond and the pathway leading to a second seating area at the rear of the garden.

Katrina’s second design was a client from last year who also had to put garden works on hold due to family issues. He had decided against including a garden office at the bottom of the space, realising that they were expensive and possibly something that he wouldn’t use. He had decided to give the bottom end of the garden over to his children and include a table tennis table and trampoline. Katrina designed a modern garden but with a family feel. It included two seating areas with a fire pit and a hanging swing chair.

Katrina went to Walthamstow for her third garden design. This couple were looking for a garden landscape designer in East London to help them develop their garden. They had bought the property last year and spent time renovating the interior. This was a garden which was laid over two levels. They wanted to push the ground level back in order to free up more space for dining and entertaining. Katrina helped them develop a space that included integrated seating and an artificial lawn as well as a secondary seating area towards the back of the garden. Pleached trees were to aid with privacy in the space whilst a feature wall directly outside the patio doors was to really give the garden a wow factor when viewing the garden from inside the house.

Katrina also went to see a couple in Woodford in East London. They were looking for a planting design scheme for their existing garden which had been built last year. They had railway sleeper raised beds so were looking for inspiration as to what to fill them with. They particularly liked architectural planting such as palms and with the sunny South facing garden this would work really well. Katrina agreed that planting in the space with leafy architectural palms was a great idea but also made some suggestions for dividing the garden up slightly. They are now in the process of commissioning a design.