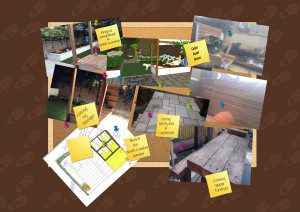 Our London garden designers are on annual leave, so Matt has left the team in charge on site. He worked hard on the last day to make sure the garden design in West London was completed before we left. He will return in a weeks time to install the Moroccan rocks which have arrived from Morocco.

Work continues on site on a garden design in East London. The railway sleeper raised beds are now built and the panel fencing has also been installed. The team are currently finishing the painting and planting which will be completed upon our return.

We have another garden design and build site running in East London. The clearance and fencing have been completed, so this week it was time to start laying the Indian sandstone paving.

Client’s in Hampstead, North West London have confirmed they would like to go ahead with the garden design package, following Katrina’s consultation last week. Matt is due to complete the site survey next week.