Skip to content
Garden Buildings – Nothing Grotto about this building… 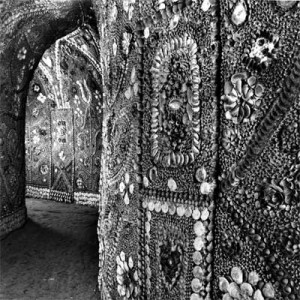 The Garden Buildings grotto dates back to the 16th century.  No fewer than 4.6 million shells makeup the wonderous labyrinth that is Margate’s Shell Grotto.  Discovered in 1835 the origins of this grotto are still up for debate.  Mosaic covers the walls constructed from the shells of whelks, cockels, mussels and oysters.  Open to the public the grotto has been open to visitors since 1837 only two years after its discovery.

Here’s some more information from the people at Shell Grotto:

“In 1835 Mr James Newlove lowered his young son Joshua into a hole in the ground that had appeared during the digging of a duck pond. Joshua emerged describing tunnels covered with shells. He had discovered the Shell Grotto; 70ft of winding underground passages leading to an oblong chamber, its walls decorated with strange symbols mosaiced in millions of shells. Is it an ancient pagan temple? A meeting place for some secret cult? Nobody can explain who built this amazing place, or why, or when, but since its discovery visitors from all over the world have been intrigued by the beautiful mosaic and the unsolved mystery.”