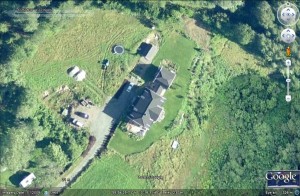 Last week I flew to Norway to visit a garden sited on the side of a mountain.  Thomas and Nina had built the house which they had part designed themselves 6 years earlier and were now looking to develop the garden space to maximise the breathtaking view.  Thomas built parts of the house and enjoys a building challenge, so we were able to approach it from a ‘no holes barred’ standpoint.
The land around the house slopes steeply away after a few metres and Thomas has already included a terrace to house their new outdoor hot tub.  Sadly because of the access down to the hot tub it so far remains relatively unused.  They have agricultural help with some friendly goats who have already done an incrediable job by keeping the weeds down and Thomas and Nina plan to extend their area as time goes on so as to gradually increase the clearance.
We decided to conceptualise the space by firstly assessing the practicalities of the space.  Naturally the biggest consideration was the slopes and the routes through the garden.  We also needed to give consideration to the sun, wind and extreme snow that sees Norway under a metre of snow from October to march every year.

This design sees a series of steps linking the top terrace to the bottom terrace. Thomas is a keen builder and is able to tackle any projects. 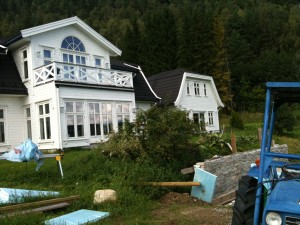 The main issue is the area directly outside doors is very long and thin so in order to increase the potential usable space the concept suggests a series of terraced decked areas. As you exit from the main double doors the area of decking leads on to a paved slate area. This area stretching across the width of the garden leads down to the left to the decking circle, which in turn follows down to the bottom terrace using a series of decked platforms. Each one of these platforms can have their own identity, one may be used to display pots, which in turn will help prevent people from falling off the edge of the decking at height. The next may house a sculptural chair, the third a lookout point, the fourth one for feeding the goats in the fenced area beyond, and so on until the bottom area is reached. 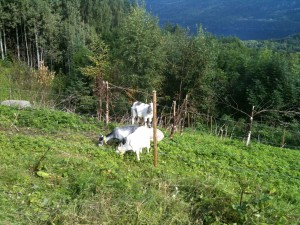 The Ghost gardeners. They have already cleared a very large area of land since June, and next year will be put out to work again, to chomp their way down the mountain.

The area which houses the hot tub is to be on one level. It has the dry stone wall as a backdrop to this area from which a water blade will pour water into the cobbled trough cited at the bottom of the dry stone wall. A bench seat then follows the shape of the decking and the platforms above allowing for wood coping to make a bench seat. A fire pit placed in front of the curved bench allows for heat and another source of attraction in the chilly Norwegian evenings. Next to the hot tub up ended 6 x 6 sleepers with an cube at the base and took some allowance for a whimsical locker style changing hook area. The decked area above juts out over this area and a void space will have doors put on the front to allow for storage of cushions and outdoor beanbags.

A series of steps travel up the other side of this decked area. A slab of slate, at the end of boulder framed with timber archway. This series of archways, travelling up the side of the hill to the terrace above, are being used to frame the vista beyond. The concept visualises approximately four or five of this series of archways before arriving at a patio circle. Again a fire pit will be centred in the middle of the circle, and a timber feature wall with seating will act as the backdrop. The feature wall to be a series of elongated columns filled with logs to add texture and interest. This circle aims to capture the best view of the fjord and the surrounding area. 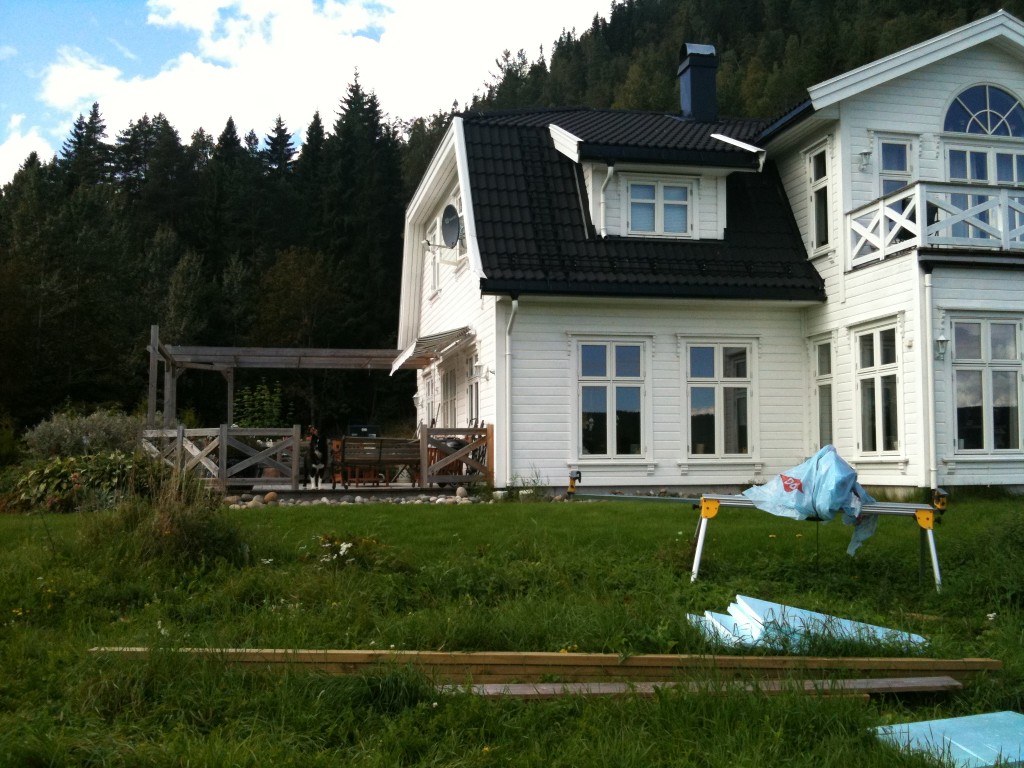 The side of the house with the mountain beyond. The existing pergola and decking will remain.The propsed raised beds for the front area incorporating a wooden bench.

To the right of this space leads round the edge of a raised water feature. In its centre is a sphere which has been milled to allow water to run down its base acts as a feature. A Stepping stone semi-circular pathway then leads on to a outdoor shelter. This outpost is a timber cube with circular openings cut into the sides. These openings in turn form circular decking patios. The outpost offers shelter and the sense of intimacy from the Norwegian elements.

The other direction that can be taken from the paved circle is to lead back up towards the house, via three stepping stones, onto the deck area. This large deck area will be half roofed and timber framed providing cover from showers, and will have a table and chairs for al fresco dining. This area will have a timber feature wall in the back to allow glimpses of the view beyond from the lounge. This wall will be a series of frames, with  a pivot point doors in each, allowing it to be opened or shut depending on the mood. Running down the side of this patio will be a path leading to the existing decking, to the left of this path the existing grass will be extended to allow more of an open space and usable area. Existing decking will remain as it currently stands.

The feature wall behind the paved circle, which consists of timber pillars filled with rough sawn logs. 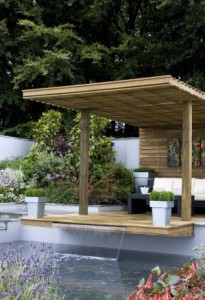 The common theme throughout the garden will be the addition of a stream motif which runs from the front of the house down the terrace to the bottom terrace by the steps and back up the other side. This serves as a link from the front and the back of the garden as well as the linking from left to right. This stream will take the form of slate chippings running underneath lavender which in turn becomes stones and then back into slate and embedded pebbles in concrete whilst it runs down the steps and arrives at the cobbled rill on the lower terrace area. The motif will there be picked up again at the top terrace centred in the decking with the addition of the sandstone sphere in the decking and cobbles running from that sphere across the terrace and into another paved circle outside the annex. The existing grass area to the left of the house will stay as it is where the addition of the goat shed for the winter months is due to be built in the next few weeks. The existing shed and the raised planters to the front of the annex will also remain as they are required for storage and growing vegetables. The area directly in front of the house would be repaved and enclosed with the addition of a raised bed. This raised bed will incorporate a wooden bench seat and will be backed with timber upended to give a bit of definition to the front of the house and the meadow in the field beyond. The finish on this raised bed would be block rendered walls, and the end of the raised bed will come around and form a sculpture using existing boulders, large cobbles and pebbles. 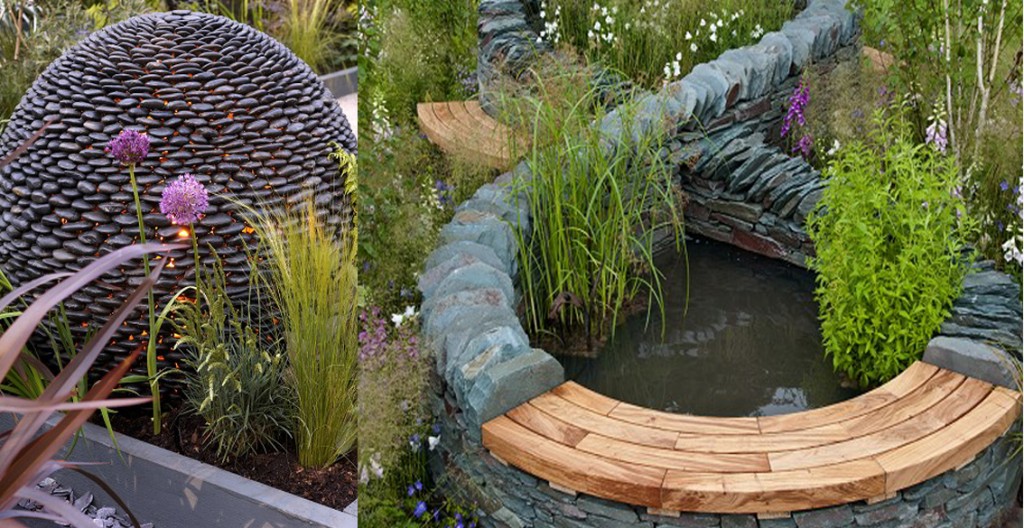 The propsed raised beds for the front area incorporating a wooden bench.

Thomas and Nina have had a lot to take in with this concept. Garden design is a relatively new idea in Norway and with extreme weather conditions to consider as well as new ideas they have a lot to think about. Hopefully we will get to design this Norwegian garden and will be able to return once more to such a beautiful spot with such fabulous hosts – watch this space for more on Norway garden design from Earth Designs.