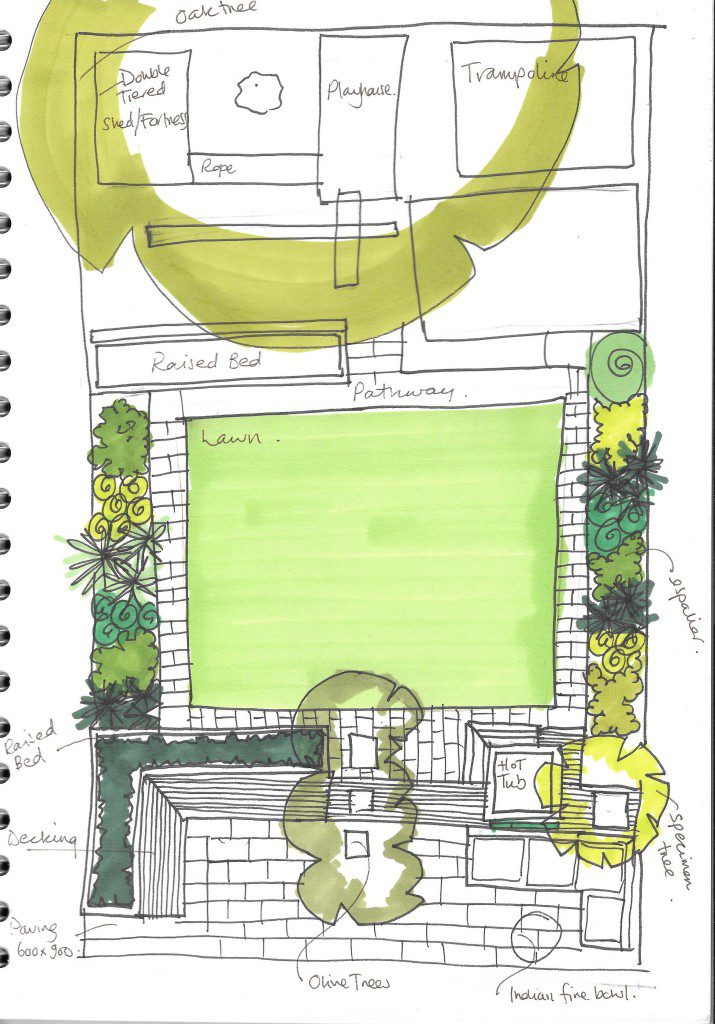 As they wanted so many things from the garden, Katrina set about dividing it up into sections each with a different use. She placed a raised bed made from railway sleepers for some “grow your own” in line with the existing shed. And gave the bottom half of the garden over to the younger members of the family.

Trampolines are unforgiving. Katrina managed to propose a square trampoline that could be tucked in behind the existing structure and hidden. The huge oak tree in the garden was such a dominant feature of the space that it needed to be embraced. An elaborate playhouse/treehouse was proposed with a interconnecting rope bridge and slide.

Being a family space, having a lawn is important. By adding a pathway around the edge of the lawn, it serves two purposes: one is to make it easier to mow the lawn as a clear mow line is defined, he second is that it becomes a track. Kids can ride their bikes, scooters, or just push the toy cars around it. It kills two birds with one stone.

The area close to the house was to be set aside for more adult relaxation. In this Hadleigh garden design, an integrated bench formed an L-shape to the left of the space. At its end it travels vertically and horizontally across the space in order that it could tie in with the hot tub. A raised bed running behind the bench helps to define this area.

The client had been given a hot tub and were wondering whether to sink it or not. The budget was not that big, and to create a sunken hot tub would have been a costly exercise. Katrina proposed that the hot tub was clad around two sides, with steps leading up to it on another. This way it would give the appearance of being part of the interface of the garden but for another cost.

By bringing a specimen trees up close to the house, it plays with the sense of scale. Katrina use this design technique to give the space a playful, magical feel. Three olive trees were proposed to run parallel to the fences, creating a visual divide between the dining and lounging area.