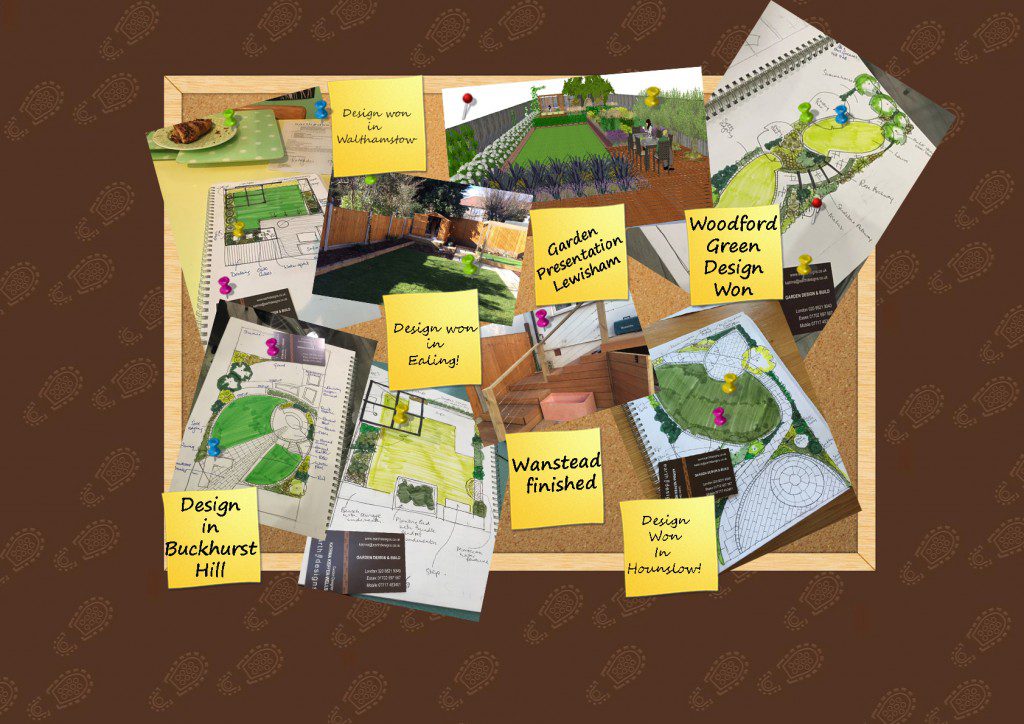 It has been a busy week at Earth Designs towers

The first space was a small courtyard garden in Ealing which the client wanted to pep up. They loved growing veggies but also wanted to create somewhere for the kids to play and relax. They had a penchant for Morocco so were looking for a space with a Moroccan twist. Katrina delivered a sketch which included a raised bed, a clever pull out sandpit, a timber frame pergola cube for play equipment as well as a Moroccan fountain. They commissioned a design there and then which Katrina will work on over the coming fortnight.

The second was for a family garden design. The client lives in Hounslow and after extensive interior renovation had turned their attentions to the rear of the plot. This large garden had a brick built shed and huge garage at the rear. The client wanted a family space, as well as somewhere to entertain en masse with a marquee a couple of times a year. Katrina broke up the blocky nature of the space with sweeping curves, oval lawns and arced patios. Zoning the garden into different areas allowed them to focus more of the adult features towards the house where it would be viewed internally and leaving the play areas and veggie patches towards the end of the garden. They commissioned a design whereby Katrina will produce a setting out drawing and work with the client to find a landscaper to build.

Katrina presented to a client in Lewisham on Friday. This will be a family space which will include a nice area for teenagers to hang out at the rear of the garden. A mature oak in the garden provides height and a decking area near the house and towards the bottom of the space will provide space for dining and relaxation. Oak cubes and specimen trees provide structure, whilst a decorative screen will add height and drama. Matt is working with the client to manage the project.

Several design consultations are scheduled towards the end of this week.

Katrina then went to visit a family looking for a simple low maintenance garden in East London. They wish to utilise the rear of the garden a bit more and plan to include a ‘mancave’ to the rear of the space. They wished to retain the existing patio, but add in some interest and make it more space efficient. Katrina suggested pleached trees to aid with screening, a raised bed with a bench attached which would free up some floor space for outdoor sofas.

Following that Katrina won a garden design in Woodford Green. The client has inherited the property and with it a garden which had seen little care for several years. They had cleared the garden, including thinning out some trees and were now looking for a solution to bring it to a usable state. Katrina worked with them to introduce some sweeping curves, a rose arch, two lawns leading to a woodland area with a summerhouse to ensure that the long journey to the bottom was worth it. They commissioned a design which Matt will kick off with the survey in the next week or so.

Following that, the third consultation of the day was for a couple in Buckhurst Hill. Their garden was over two levels and needed re-working in order to get them most from their space. The interior floor followed outside but the patio was too small to accommodate a table and chairs comfortably. The client also wish to include a raised bed and seat as well as an area for growing veg. They also wanted to include a water feature and an outdoor cooking area. Katrina worked on an Art Deco design, providing bold pathways, circular lawns and repetitive curves. They are considering the design alongside which type of structure they may decide to include along the rear of the property.

Saturday saw a visit to discuss a garden design in Walthamstow. With a planned extension into the garden the client was keen to make the best use of the small space for them and their 7 year old son. Katrina split the garden into decked levels and included a water feature for the son to also play with, a timber frame pergola for play equipment, a raised veggie planter as well as some kooky touches to match their style and personality. They commissioned a design which Matt will follow up with a survey.

Meanwhile, Matt and his team completed the garden build in Wanstead, East London and Leigh-on-Sea in Essex. The stainless steel wire was installed on the balustrade in Wanstead and planting and lighting added the finishing touches to both gardens. The clients’ were delighted!