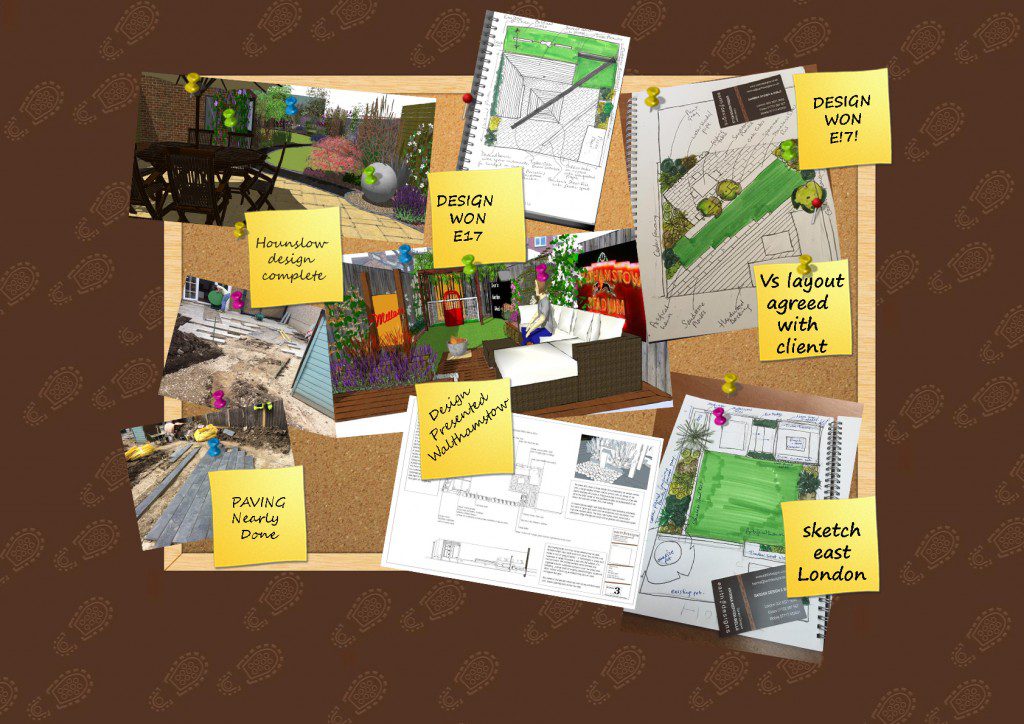 This week Katrina visited several clients for quotes. The first was a client looking for a garden designer in East London. He had found some designs on the internet and was looking for some ideas to add interest to his garden in Walthamstow. The client had had some decking installed a year ago, along with artificial grass, however Katrina felt that without removing these it was going to be very difficult to add increased “wow” to the space. She persuaded him to rework the entire space including the boundaries which he was happy to do and signed up for design.

Katrina went to see another client looking for a garden designer in East London. She wanted a Walthamstow garden design and had called with ideas for designs following a browse around the portfolio. They were having a kitchen extension and wanted to maximise the outdoor space ready for the addition of her second child towards the end of the summer. The client was delighted with Katrina’s suggestions for an adult space but with some interactive elements for the children. She commissioned a design and Matt is due to go and undertake the survey next week.

Katrina went to present to the clients looking for landscapers in East London. They had requested a quirky contemporary design but with plenty of space in the small garden for their son’s footballing mania. Katrina produced a bright colourful, retro, quirky design that delivered something for everyone. Once they have contacted the builders to build the extension, they will then speak to us about their availability to construct the garden.

Katrina also visited a client in Hackney. They were expecting a baby in July and following an extension wanted to create a space in the garden that offered comfort as well as a healthy dose of personality. Katrina suggested a sunken seating area towards the rear of the garden as well as replacing the existing fencing which did not meet with the modern tastes. Katrina is just waiting to hear whether they would like to commission the design package.

The last consultation was for somebody looking for a garden designer in North London. They had a large three-storey townhouse in Stoke Newington and wanted to create a natural tranquil space for their ever increasing family. They had lots of walls around the edge of the garden which added character to the space and two mature fruit trees, one of which they would like to retain. Katrina created a sketch based on diagonals with a few eccentric elements. Courten steel planters and screens added extra interest to the shady planting scheme. Katrina is waiting to hear whether they would like to commission a design package.